A NEW VARIETY OF HAWORTHIA LIMIFOLIA FROM NATAL

The typical form of Haworthia limifolia is from somewhere west of Delagoa Bay and was described by Marloth (1908).  Prof. R. H. Compton has kindly sent me specimens from the Umbuluzi River Valley north of Stegi and also a form from near Gollel on the southern border of Swaziland.  Herbarium records show that forms also occur near Barberton;  the confluence of the Pongola and Pivaans River 20 miles east of Paulpietersburg; Ndumu, Zululand;  Kosi Bay, and the Ubombo Mountains in Zululand.  A photograph of a plant collected by Mr. E. R. Harrison 6 miles west of Somkele on the slopes of the Nkonyana Mountains, matches plants collected by me at Ngceba, north of the Black Umfolozi River, between the Umfolozi and Hluhluwe Game Reserves.  This form is also reported to occur on the nTsuzi and Ulumbi hills which flank the Umfolozi Reserve on the north and south.  Two plants have been collected from this area by Mr. H. Dent.  Mr. A. F. Bruyns-Haylett also records it from the Mozaan River Valley between Swaziland and the Pongola River (fig.2.)

In 1956 two unusually robust plants, not agreeing with any previously recorded forms, were collected by the late Mr. F. Bayer in the Nongoma district of Zululand.  They belong to the section Limifoliae Smith because of the leaves, which are spirally arranged in a tight rosette.  However, the tubercles are irregularly arranged on both leaf surfaces and the characteristic transverse lines are not apparent (fig.2).   It has been given the varietal name H. limifolia var. gigautea because of its exceptionally large size.  The native name of this plant is “u mathithibala”.  It is of interest to record also that detached leaves of this plant can produce new plants even up to a year after rooting.

A great deal more information on the distribution and variability of H. limifolia is required before the true relationship of the various forms can be determined.  The present species concept may comprise either a series of intergrading forms or varieties, or certain composite elements may merit species status. This account of one particular element is presented in the hope of stimulating further interest in this problem. 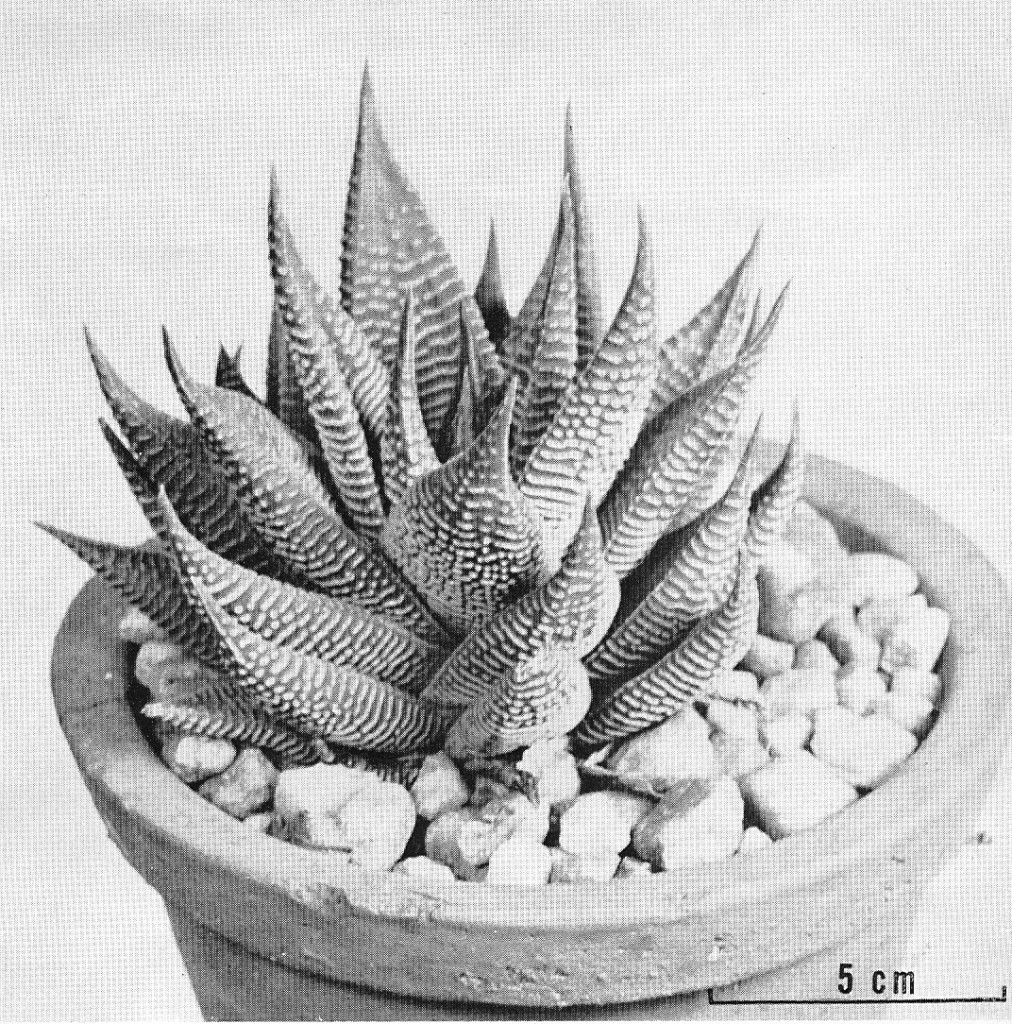 I would like to express my thanks to the following people who have assisted me in the presentation of this note:

Prof. R. H. Compton of the Swaziland Government Herbarium;  Capt. D. R. Keith and Mr. P. T. Forbes of Stegi;  Mr. A. F. Bruyns-Haylett of Pietermaritzburg;  Prof. A. W. Bayer of the University of Natal, Pietermaritzburg; and particularly Dr. R. A. Dyer of the Division of Botany, Pretoria.

Although I did make an attempt to locate H. limifolia in the field at the time, it was a very amateur effort and yielded very little.  In 2005 I made a more professional field trip and the result is reported in Aloe 40:41-52 (2006) and reprinted in Haworthia Update.  It is interesting to note that

That the Mozaan River locality is just north of the Bivaan River locality reported by Charles Craib and near where Dennis D Kok later showed my H. limifolia too that I reported as “20 miles west of Pongola”.  These localities are west of the Ithala Game reserve that now seems to be the most probable origin of the original var gigantea.  My opinion is that the informally described var striata is a variant of var gigantea and that it is actually more representative of the variety.