The fascination of haworthia lies in the shape, arrangement, compact neatness and marking of the leaves.  With nearly 170 named species and over 200 varieties, the genus is unfortunately very confused as far as the application of these names is concerned.  Many of the species originally described by Haworth and Baker have not been recognised since, while in recent times new species have been described with little or no reference to occurrence, distribution and variation of existing or related species.  Obstacles in the way of better classification and recognition of the species are many, and include insufficient information on basic morphology.  Secondly, whatever morphological differences there might be between species are often difficult to rationalise and describe, and may even be difficult to perceive with the naked eye anyway.  A third difficulty is the whole question of framing an adequate species concept, or for that matter, a concept of sections.   There is at present even an illogical trend to ‘lump’ the genera Astroloba, Poellnitzia and Chortolirion, into Haworthia, showing that concepts at that level have not reached reasonable finality.  The removal of genera can be applauded for its broadmindedness, if singular lack of appreciation of (a) the criteria by which they can be recognised, or (b) the reasons why they were erected in the first place.  Such an approach must naturally descend to species level, and at a time when the birth pangs of ‘splitting’ and consolidation have barely started, can only lead to a loss of information.

The writer’s experience of the naming of Haworthias and also of other succulent plants, suggests strongly that species descriptions based on broad external appearances are often very inadequate.  Growing conditions including the influence of soil types, temperature, water and light may have such a strong influence on plant growth as to completely nullify the written description, particularly where based on single specimens as has so often been the case.  The object of this article is to discuss the leaf arrangement in Haworthia and its relationship to the general appearance of the plants.  As in many plants, the leaves are produced consecutively at the growing point of the plant, and are consequently arranged in a single continuous spiral about the stem (the genetic spiral).  Thus Aloe polyphylla is by no means unique with its leaf spirals.  When the leaf bases are wide and enfold the stem it is much easier to observe this spiralisation, but when narrowly attached on a broad stem it may be more difficult to detect.  Generally the leaf bases are not continuous as they are in A. broomii where the leaves may be detached from the plant in a long continuous ribbon.  The leaves are produced at a fairly constant angle subtended from the stem and the result is similar to that obtained say when an orchard is planted with the trees at equal distances in and between the rows – i.e. secondary rows are visible when the orchard is viewed from a different angle.   These secondary rows are called parastichies.  The very obvious 3- and 5-tier arrangement of the leaves in the Haworthia section Trifariae and in Astroloba are the result of secondary spiralisation and have long been recognised in taxonomy.  Similarly Haworthia retusa was originally defined as quinquefarious and H. truncata has always been distinguished by its distichous leaf arrangement.

Generally it seems in Haworthia that the twenty-second leaf is again approximately superposed over the first after 8 complete revolutions of the genetic spiral (leaf-divergence (8.360)/21=137 degrees).  However, in the Trifariae only three leaves are clearly visible when the plant is viewed from below and these leaves form the bases of the three secondary spirals which characterise the group.  The leaves are arranged in three tiers with the leaf sequences 1—4—7—10;

In long-stemmed species particularly, it is possible to see simultaneously the arrangement of leaves in tri-, quinque- or octafarious series e.g. in H. reinwardtiii and H. coarctata.  In the short-stemmed, broad- and few-leaved species such as H. retusa or H. pilifera (now H. cooperi), only the lower series are visible, whereas in the acaulescent, many-leaved species, the higher series may appear.  It may seem that the angle of divergence of the leaves from one plant of a species to another is a constant one.  This is not true for the writer has seen for example a single plant of H. rnargaritifera now (H. pumila) with 8 perfect vertical rows indicating a leaf-angle of 135°.  Normally in this species the parastichies 5 and 8 are seen ascending in opposite directions.  In H. tuberculata (now H. scabra) the leaves appear randomly arranged at some localities whereas at others the plants are either trifarious or both the 3 and 5 parastichies are apparent.  In H. viscosa one would expect that to achieve three near vertical leaf tiers, that the angle of leaf divergence must be 120°.  Actually the angles prove to be only complementary, being often on the order 135°, 115°, 110° – to the point that they can be accurately measured.  Similarly in a plant of H. sordida the angles were measured at 180°, 95°, 85°.  Despite the fact that no one angle is measurably the same as the next, the plants still age to maintain an orderly progession of leaves.  In H. truncata, which is distichous (and really only approximately so), the two rows of leaves are actually the consequence of a spiral arrangement in which the leaf angle is near to 180°.

In H. limifolia the average leaf angle is in the vicinity of 160° but this is by no means constant as Diagram 1 of the variety ubomboensis will show.  Some leaf pairs are almost opposed at 180° and the youngest 7 leaves have an average divergence of 170°.  What is perhaps important is that two parastichies are prominent – the primary counter spirals with the leaf sequences 1—3—5—7; 2—4—6—8.  The impossibility of accurately estimating the central axis in the plant from which to measure the angles of divergence must be stressed.  By counting the number of leaves in rotational sequence until a leaf directly above the first is reached, an estimate can be made; thus the ninth leaf above the first in 3 revolutions is the consequence of (3.360)/8= 135 degrees divergence.  Spiral patterning is also related to stem diameter in proportion to leaf thickness and width.  If the stem diameter is great and leaf width small then the higher parastichies will appear.  The relation of stem length to number and size of leaves will also affect spirals.  In H. reinwardtiii and H. coarctata, a complex notorious for its many varieties and forms, the two species with their discrete distribution ranges are separable almost only by the fact that the ratio of number of leaves to stem length differs.  Thus in H. reinwardtii the leaves are more densely compressed on the stem, there are more leaves per unit stem length and the angle of ascent of the genetic spiral is approximately half that in H. coarctata.  Oddly enough the longest stems observed in a recent field study were H. reinwardtii:  27 cm and H. coaretata: 49 cm.  An associated variable is the ratio of stem diameter to leaf width…1:1,7 in H. coarctata, and 1:1,16 in H. reinvardtii.

Diagram 1 illustrates the leaf arrangement in a single plant of H. limfolia var ubomboensis showing the two counter spirals very clearly.  Diagram 2 illustrates the situation in which a uniform leaf angle of 135° presents 8 vertical parastichies, and also how variations of 1—4° alter the entire conformation in only 3 revolutions of the genetic spiral.  At 139° five parastichies are becoming prominent which will reach the vertical at 144°, whereas at 131 °three parastichies will be dominant and reaching vertical at 120°.  A 1°  increase in leaf divergence will result in an 8° displacement at the ninth leaf.

A.H.Church in a fascinating book… “On the relation of phyllotaxis to mechanical laws” (1904), explains that there is a fundamental constant which determines leaf arrangements and spiralisation.  He defines this as the “bulk-ratio”, which is the ratio of the diameter of the leaf buds to the diameter of the stem at the point at which they are joined to it.  In this light, raw dimensions (especially from single plants) can be seen as only a fractional contribution to species descriptions.  Where even normal standards of biometry have been ignored it is even more important to appeal for a more realistic use of measurements.  While proportionate dimensions of leaves and stem (ratios between leaf width, leaf thickness and stem diameter, for example) may help to better describe a species, it does not mean that the basic problem of defining the species will be solved.  In Haworthia the populations are so localised and often so variable that recourse will have to be made to even more refined methods before a satisfactory species concept will be obtained.  It is unlikely that “bulk-ratio” will help solve any problems at species level, but there is no doubt that it can contribute to deciding limits of sections, subgenera and even genera. In the case of the two very closely related species H. maughanii and H. truncata, it would be very interesting to know why the leaves of the former species “spiral” and why in H. truncata they remain distichous. 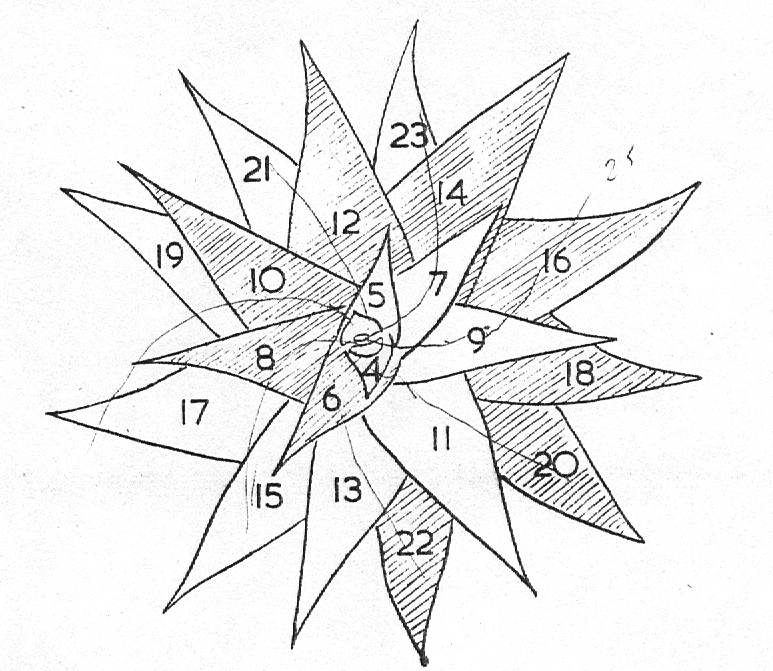 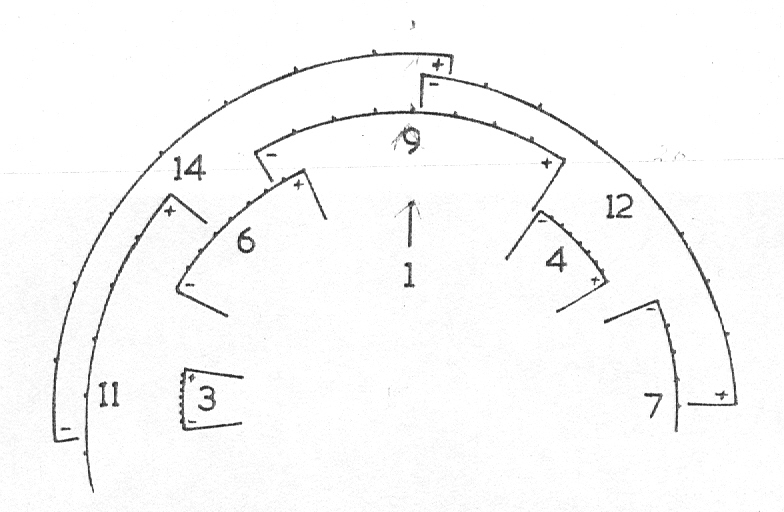 Diagram 2. Representation of leaves diverging at an angle of 135° in which 8 leaf tiers are vertical and a 4° increase or decrease in leaf divergence to show the appearance of 5 and 3 parastichies respectively.