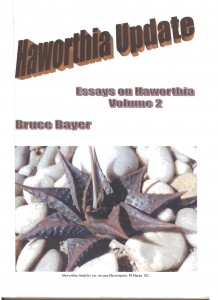 I must explain why I wrote and why I write. Reading and writing are inextricably related. I observed Haworthias, I read about them, and I wrote about them. This was to organise and record what I had learned, to refute what I deem to be wrong and to seek verification of the new. I never did feel adequate to the task of formally revising Haworthia.  The fact that I did so was because I was asked to. It was quite clear to me that however inadequate I was, there was nobody else who was going to do it any better. The work (Haworthia Revisited, 1999) was premature in the light of what really needs to be known if a good classification is going to emerge. It is a considerable disappointment to me that much of my writing has not served to guide other writers as I hoped it might. The forewords to Breuer’s two volumes by messrs Ihlenfeldt and Smith confound my sense of what is true that I truly wonder if there are readers who are anxious to share that same ideal. Sometimes I wonder if my writing has served any greater purpose for which it may have been intended other than to help me organise my own ideas and activities.

Species identification in Haworthia is difficult.  This is not a new statement, but simply now a self-evident truth which is becoming increasingly so as I extend my field experience.  Recently someone commented on the odd flowering time of H. pulchella var. globifera, commenting that the flower was even unusual.  The species pulchella was not yet showing signs of flowering, whereas the odd H. monticola var. asema was budding.  The similarities of that variety to globifera in terms of leaf colour and shape, proliferation and flowering time are striking.  I later looked more closely at the flower of globifera and found that, in the clones I had available, there was no visible difference whatsoever, between the flowers of globifera and H. cymbiformis var. incurvula from Pluto’s Vale.  My collections of the latter were also not all in flower, and quite clearly flowering time (useful as it is) is no more an absolute than can be stated in Stephen Gould’s paraphrased…”The strongest statement that one can possibly make in biological science is ‘hardly ever'”.  What to say of the similarity of the flowers in two elements which could hardly be further apart in the sense that classification is applied in the genus.

There is an almost universal conviction among laymen that taxonomists are a quarrelsome lot who do no good but argue about names, and change them in the process.   This is unfortunately largely a justified observation, but the justification arises from an inexcusable degree of nescience on the part of both botanist/taxonomist and involved observer.  As my essays in recent years have substantiated, plant classification seems to offer the lowest level of intellectual entry to science writing.  Anyone, without having any qualification or degree of competence, has access to plant description.   Nothing more is needed than an existing template and some kind soul to write some Latin words for the required synoptic sentence.  Without any kind of overview or experience of biological systems and thus a more general feeling for classificatory criteria, anybody may step forward and claim authority.

These claims cannot be questioned or challenged by the average or even above average botanist, and not even by those odd few who specialise in classification.  The adage “experience is what you have acquired after the need has passed” is too true for comfort.  Too few botanists know enough outside of their specialised fields to question what is happening in other families and genera.  They are too busy defending the integrity of their own beliefs and systems.  Publications in prestigious, rigorously refereed botanical journals fail to neuter some really poor science writing.  These observations are all substantiated in the following essays or elsewhere.

In Haworthia, the situation is not that botanists have failed to involve themselves.  They have.  The results are no better than that of the foolhardy amateur.  The consequence is that we now have a fair body of interested growers and collectors who cannot know what is true and what is not.  These people can make any derogatory statement about taxonomy that they wish to make, with the confidence that they may be right.  Some equally ignorant botanist will step forward to agree and may blithely enter the writing arena too.  Mutual backslapping is the order of the day with scant regard for the facts and for what might be true.

The question can again be asked.. “Is Haworthia a problem genus?” I wrote an article entitled “Haworthia as a problem genus”, which was published in the Cactus and Succulent Journal (6:251,1971).  After so many years and so many written words, I am constrained to ask myself how I see the position now.

I recently wrote an article discussing the question “Is classification science or art?”.  This was published in Asklepios (77:3, 1999).  Then I also wrote a collection of essays published as “Thoughts on Haworthia”, in which I try to show that Haworthia is not peculiarly difficult.  Rather, that the problem is how we as writers and readers perceive our respective roles, and how much we know about plants and their plasticity.

My conclusion is that individually and collectively we may not have a very clear idea of what we are doing or trying to do. If one looks really objectively at the issue of classification and all that is written about plants and the names we use for them, it must be apparent that we are not being very sensible.

What appears to be the situation is that each of us has a concept and construct in our personal consciousness of what we regard as a species.  Whether or not this is the same for all of us, and if our worded definition for “species” is the same wherever it is used, does not seem to matter.  Generally we may use a word with a fairly liberal interpretation of what it may actually mean, in the framework of a limited vocabulary and knowledge.

One of my essays in this volume is an analysis of the book “Rock of Ages”, written by Stephem Jay Gould.  Here I try to show that we are experiencing problems with the fullness of our lives.  We as human beings are not doing in our limited spheres of consciousness, what we ought to be doing if we wish to understand creation – of which Haworthia is a very tiny part.  My wish thus in submitting these essays for publication is that some silent majority does exist and that my work will in a small way perhaps satisfy their own inner wish to know what is true and real.  A deeper wish is that someone better equipped will pick up from where I will leave off.

I acknowledge that a better and more satisfying discussion and explanation of Haworthia is desired.  Unfortunately the competences, interest and opportunity do not seem to be vested in anyone else that I would gladly submit to.  I am extremely grateful to the many people who have simply taken me on trust.  There are many individuals who could expect to find themselves listed here as a simply matter of fact rather than a measure of personal satisfaction.  Most of them are unlikely to ever see this publication and I thus record my enormous appreciation to a faceless multitude for kindnesses and consents that made access to the plants possible.  I find it curious that Conservation bodies demand to be acknowledged when their contribution is largely passive and permit aquisition a demeaning process.  I am grateful to the law enforcement officer who in a kind aside commented that their regulations were not for people like my self.  I think it is necessary that Conservation recognizes a constitutional right of individuals to engage themselves in study of nature, and not condescension on their part to allow it.  I have tried to comply with Conservation legalities and have certainly done so in respect of intent.  I am not sure that authorities are achieving what they may aspire to as I have seen too much degradation of this great natural resource of ours and alienation of people to be convinced they are properly directed or motivated.

I would particularly like to thank Kevin Belmont for his interest in the manuscript, and to Harry Mays for much more than just the labour of bringing it to press.  We have had a long association in which he has never been less than helpful and consistent in his view that the platform should be accessible to all.  Bob Kent, Steven Hammer, and Gerhard Marx have patiently endured my ranting.  Other contributors are acknowledged at various places in the essays.  I truly regret that Kobus Venter has not had the time to participate as fully as he would have liked, as the work would have been better for the benefit of his wisdom, interactive personal skills and interest.

1 thought on “Volume 2, Introduction and Acknowledgement”