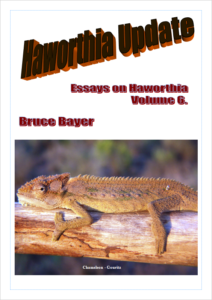 It is a matter of considerable concern to me that the lack of “adequatio” for the understanding of Haworthia is so conspicuous by its absence.  Three reviews appeared for 5 small essays published as a supplement to Haworthiad and also as a portion of Haworthia Update Vol. 5.  To suggest that these reviews are anything but some sort of myopia is an understatement and I find it difficult to try and explain why.  My reason is simply that many criticisms simply arise out of the fact that the reviewers are not familiar with my writing and have no basis for assuming that they are up to the task of reviewing what I have written.  Nothing is being learnt from history where the same old arguments about opinions hardly differ from those voiced 60 years ago.

The real issue is that there is confusion in the minds of collectors as the user public, about the uses and application of Latin names in the pursuit of their interests.  Professional botany offers no assistance and any numbers of poorly equipped authors of necessity, invent and re-invent types, the interpretation of names and then their application.  This does nothing to assist the collector.  The reviews of that small segment of my writing do not help either and certainly do not generate a climate that encourages me to write any further.  One review calls for a revision when the message is that a formal revision might just be intellectual vanity when a practical list of names and explanation is presented to add to an existing Revision.  A second review seems to tout a mistaken belief that self fertility and polyploidy may be explanations for the intractable problems that we have in the self-sterile non-polyploid haworthias.  A third review is seemingly facetious comment that may obscure my opinions as those of the reviewer and acceptable as such, but not if seen to be mine.  None of these reviews will be helpful to anyone who may need to decide what set of names makes more sense than another.  There is no common voice and any reader is left to make up his own mind in the absence of any good authority.  Perhaps this is something I should be personally grateful for because there are noises emanating from various sources that my opinions also threaten understanding rather than enhancing it.  I have to accept that it may be difficult for anyone to agree with me who has not had the same exposure to the intractability of biological systems that seems to have been my lot in life.

I regret that I did not, prior to publication, see the forward to Vol. 2 that I hoped would generate “common voice”.  It, unfortunately, is just a bit of personalized chitchat about the writer.  It can hardly generate any confidence in what he may have written about and does not attempt to do so.

My revision in 1996 (published 1999) admits the problems of typification and my attempt to stay within the historically recognized interpretations and applications of names.  A revision is fundamentally a reconciliation of new information and new “collections” and the Update Volumes have been an ongoing reporting of new finds and observations.  More than one reviewer seems to think that a change of mind is indicative of weak argument rather than a product of new and better information.

Update Vol. 1 (2001), published by Umdaus Press includes one essay regarding Haworthia mucronata and five others dealing almost wholly with Haworthia cooperi and its variants.

Update Vol. 6 is simply a small set of essays that address some loose ends of which there are still many. One essay in particular will remain unwritten because, while I have some information, it is not enough to base any conclusions on.  This concerns the area between Oudtshoorn and Uniondale.  It is also not the only gap in my experience and knowledge. The chapters in Update Vol. 2 should demonstrate just how intensively the field has to be explored to get to grips with the possible dynamics of the plants.  This view should be re-enforced by the subsequent volumes.  While I have tried to hold to a belief in “species” and names relevant to some sort of system, it seems to me that as a society we are denied the freedom to really know what the meaning and purpose of creation is.  Science itself seems to insist that there is none and botanists largely view the observance of nomenclatural rules as the primary criterion in the application of names.

My experience and observation now suggest to me that creation is purposeful and meaningful.  Life is manifested in various distinctive forms and these forms are manifested according to their DNA.  This DNA may be the fundamental stuff of consciousness in living things too; flowing from and responsive to the energy fields of physical bodies such as the galaxy and the solar system.  Life on earth is driven by catastrophic events of varying degree and varying intervals, so that species simply represent those sets of living things as they come, change and go with successive events.  We do not only need to consider what species might be and mean, but also when.  Who knows?

Printed edition of Haworthia Update Volume 6 can be obtained from