My writing has been described in all kinds of terms, hermetic and pretentious being two of the adjectives used.  Recently Kris Tamayo also suggested that he had trouble understanding what I wrote or write.  The fact is that writing and expressing yourself is difficult.  But the first place is to be clear about what you want to say.  Or is that in fact the first place?

In writing and talking about plants I personally get very frustrated by the technical problems of definition and knowledge that mess up communication completely.  This is one of the obstacles in classification where there is no species definition and we do not actually know what species are.  There are a lot of other obstacles.  Recently someone wrote and implied that there were a lot of significant differences among Haworthia that could be used to arrive at a better classification (than any already available).  The point I would make is that this person has his own idiosyncratic view of what significance means.   This is not strange at all because a prominent scientist was once applying the statistical measure of standard deviation to two and three measured samples.  That measure probably cannot be used until many more measurements are made.   What is taken to be significant may be quite irrelevant to the actual question of whether there are more or less species.  This is why amateurs and collectors should keep clear of classification.  The professionals already have too many problems.

The characters we use to make identifications are important in that they may be of the yes and no kind i.e. present or absent, or they may be graded from vague to prominent.   So it is very easy to go to one end of the scale and take only the prominent or what happens to strike your eye.  This is exactly what happens.  Unless followers and interested parties realize the impact this sort of decision making affects what they may want to know and understand, there can never be any harmony and peace in the classification process. 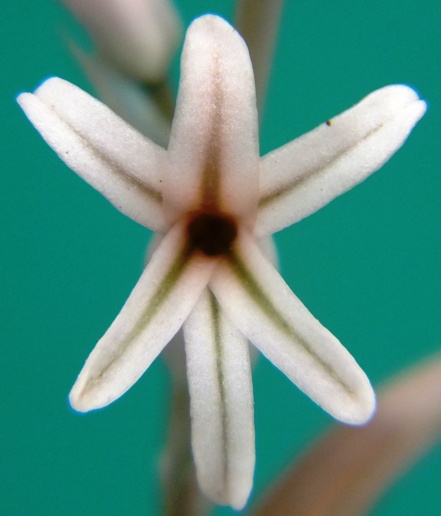 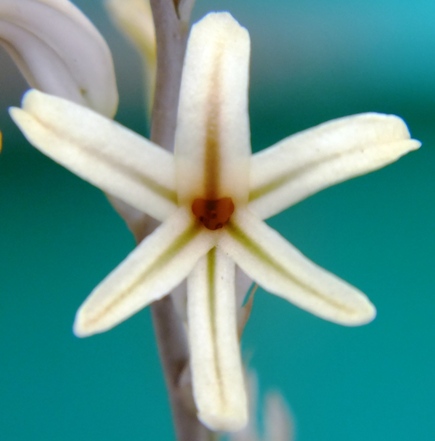 These just happen to be the only three flowers I have of a few plants of Haworthia herbacea from recent sampling.  They are shown here in correct proportion to one another with the third being 18mm across at widest spread of the two upper outer petals.  So we have two things we can call characters i.e. size and colour that we could say in respect of this simple sample,  that they are significantly different.  No matter how many times or how we measured these two things, this fact would stay the same.  The plants happen to be from two populations and we can then ask if this is true for those populations.  I did ask such a question of both H. herbacea and H. reticulata, and ended up by learning that I needed a sample of about 200 flowers to arrive at a statistically true answer at a probability of 95%.  The thing is that I could go a little further south and sample another population and get a really pink flower with a spread of 25mm or more  that would nearly double the spread of my measurements.

There are several incidentals here.  One is the delineation of the mouth into the tube of the flower.  Why is it so clear in the third picture?  The second is that the first flower has not opened as flat across the face as the other two despite being at the same expected state in respect of time from opening.  The third is that the name “subregularis” was used in this genre of flowers because the petals are so equally spread; perhaps less-so in the middle picture.  Still a fourth curiosity is that in the southwestern species with the more extreme biarcuate bud with the fish-tail tip, is how the tips of the upper outer petals are “replicate” – i.e. the margins tend to fold together.  In the Worcester/Robertson Karoo particularly H. herbacea and H. reticulata have the “regular” flower shape.  But in H. mirabilis in this area, the upper outer petals may be held in a plane directly behind the inner outer petal and do not spread at all.  There the bud tip is still fish-tail and the upper outer petal tips very replicate.

1 thought on “Comprehension and significance”