In Alsterworthia 13.1:6 (2013) there is yet another statement about the correct name for a species of Haworthia.  It reads …”The vexing matter of the correct name for Haworthia pumila has taxed some of the finest minds in botanical nomenclature”.  The article then goes on to replace that name with H. margaritifera with an explanation so simple that it casts considerable doubt onto the quality of those minds that have examined the problem. There is of course also a difficulty in that the quoted sentence implies that H. pumila is the correct name, while the article goes on to dismiss it.

The fact is that Linnaeus listed four different things (varieties) under a single name Aloe pumila, and the only issue was about which of those four things ends up with that particular first name. It so happened that Burman in 1701 made a choice, and was followed by Aiton in 1789 who chose something else.  So the name Aloe pumila stood but applied to two different things (species). Duval was unaware of the earlier Burman choice and used Aiton’s choice when he created the genus Haworthia.  Dr L. A Codd, whom I would have accepted as a fine mind (and also as a very ethical man), advised C.L. Scott that Aiton’s choice was in fact illegitimate and hence also Duval’s usage in Haworthia.  The opinion was that Burman’s choice was the first and also thus the legitimate one; and it could not be denied by the illegitimacy of the Aiton usage as a later action.  So perhaps it was/is a question of rank or just an opinion that Aiton made up pumila as an entirely new name.

There is nothing complicated and mind boggling about this simple state of affairs. Or is that so?  What on earth does the ICN as the product of presumably fine minds actually say about this? Does it take 50 years of debate to establish such a simple fact? The situation is further exacerbated in that the finest taxonomic minds are involved in an epic battle to either create a single alooid genus or many lesser genera. It appears that the latter option is winning ground although the war against single-species genera has surely not been abandoned. When the dust finally settles, it will be recognised that the taxon onto which this unfortunate species viz. Haworthia pumila/margaritifera resolves, will be a separate genus, probably Tulista, and then the truly correct name will be Tulista pumila. Or will it?

My personal opinion that however the case may truly be judged, the correct answer is the intent. Scott and Codd came to a workable end point way back in history and it has been my misfortune now to have defended that. I think there is a parallel in the case of Aloe bainesii. Put into use by Reynolds far back in history, it is found that the name barberae had page priority and thus preference. In what interest was the change made? Why does the code have a conservation facility for names? The fun seems to be in the argument rather than in usage.

The argument that I think L.A. Codd would have made is this. There are four varieties covered by the Linnaean epithet pumila. The first effective use of that epithet for one of the four was to the warty t10 of Commelin and that is how the name is formally typified.  To use of that same epithet at any other time for any other of those four Linnaean varieties would be illegitimate.  It is also not in the least certain that the name margaritifera is correctly typified by Wijnands on the same Commelin illustration t10. I aided Wijnands to this conclusion before myself stumbling on the fact that its correct typification would be on a Bradley illustration.

There is a curious twist to the issue and it is somewhat of an oversight that the persons involved never read the introduction to Haworthia Revisited. I explained the problem and also in respect to the correct application of the original name margaritifera to what we know as H. minima. I also cited the name H. pumila with the authors as (L.) Bayer to make it clear that I was not accepting the name with the authors (L.)Duval as Scott cited it. I thought at the time that it was a mistake on Scott’s part. I had also written to Dr Codd specifically about the issue and this is when he explained to me (as a professional taxonomist and fine mind) that the illegitimate use of the name pumila in Haworthia did not prevent the correct usage. It only strikes me now that he probably had advised Scott to the effect that the NAME as Duval had taken it through to Haworthia was correct, even if he had applied it to the wrong species. This whole issue has not been properly and fully aired. To argue that it is a new name seems to me just a piece of intellectual vanity that serves no purpose other than to demonstrate our collective failure to honour the intent of the code – or respect the dismay of interested person.  A last point I make is that people can and will always find topics to disagree on, so this is an important trap to avoid and be mindful of. It is not particularly in the case of nomenclature that this seems to happen. I had no doubt at the time when I made the decision to accept Scott’s usage that no matter what my decision was, cause would be found to change it.  If I had decided on either margaritifera (correctly typified) or maxima (as I. Breuer later did), this would also have been argued as wrong.

[-ed. There seems to be a number of taxonomic changes brewing. Time will tell whether pumila survives.]

The vexing matter of the correct name for Haworthia pumila has taxed some of the finest minds in botanical nomenclature. Since I do not include myself among their company, I was not in the least surprised to find that I had misrepresented the situation. Thanks to expert input from Roy Mottram and Urs Eggli we can now put the matter to rights.

The issue of the correct name for Haworthia pumila starts with the fact that in his original publication of Aloe pumila, which forms the basis for this species, Linnaeus recognized several varieties, but without explicitly listing the typical variety, thus he did not list Aloe pumila L. var. pumila. Linnaeus’ Aloe pumila was subsequently effectively lectotypified by Burman f. (1701) [and later in enor by Scott (1978)] against the illustration in Commelin’s Horti medici Amstelodamensis, which is also the type of var. margarit!fera. This renders the name margaritifera homotypic with Aloe pumila L. (i.e. they share the same type). As the autonym (i.e. following automatically from the species name) for this species, pumila would normally have statutory priority over margarit(fera BUT, in the interim, the combination Haworthia pumila (Aiton) Haw. (1804) had been published, based on the name Aloe arachnoidea var. pumila Aiton, a quite different species that we know now as H herbacea. The publication of this combination renders Haworthia pumila (L.) Duval (1809) an illegitimate later homonym and thus not available for use in Haworthia. Because the combination Haworthia pumila cannot be used for Aloe pumila L. as a result of its prior usage for some other taxon it must be substituted with the next available valid and legitimate epithet, which is margaritifera. Note, however, that in any genus other than Haworthia the epithet pumila is the correct one to be used for this species. 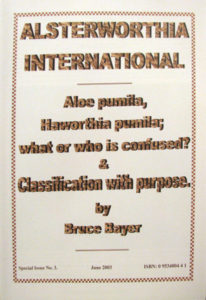 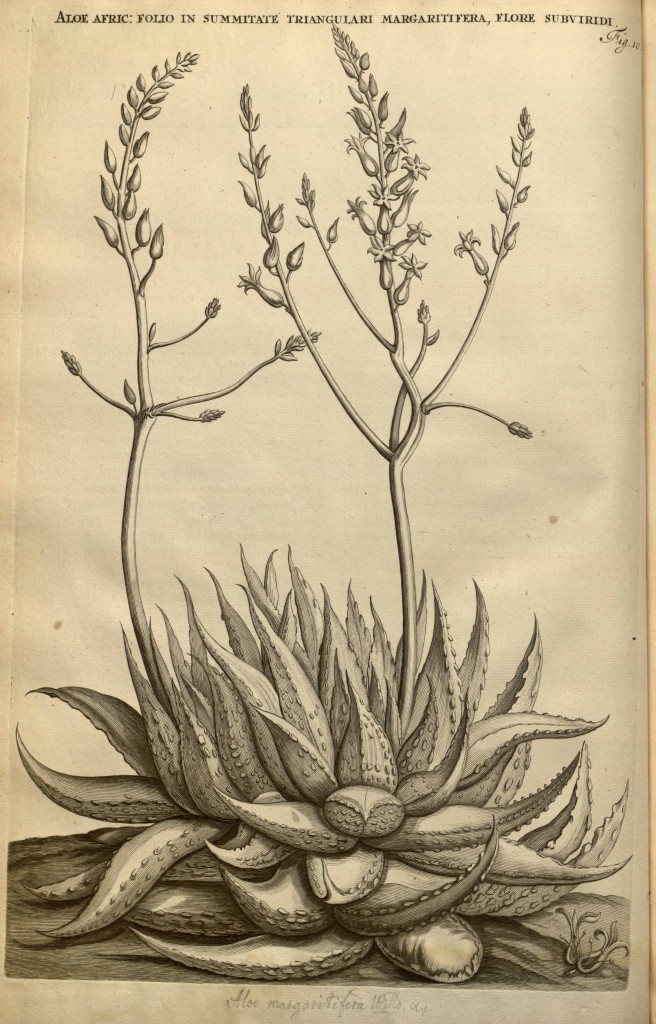 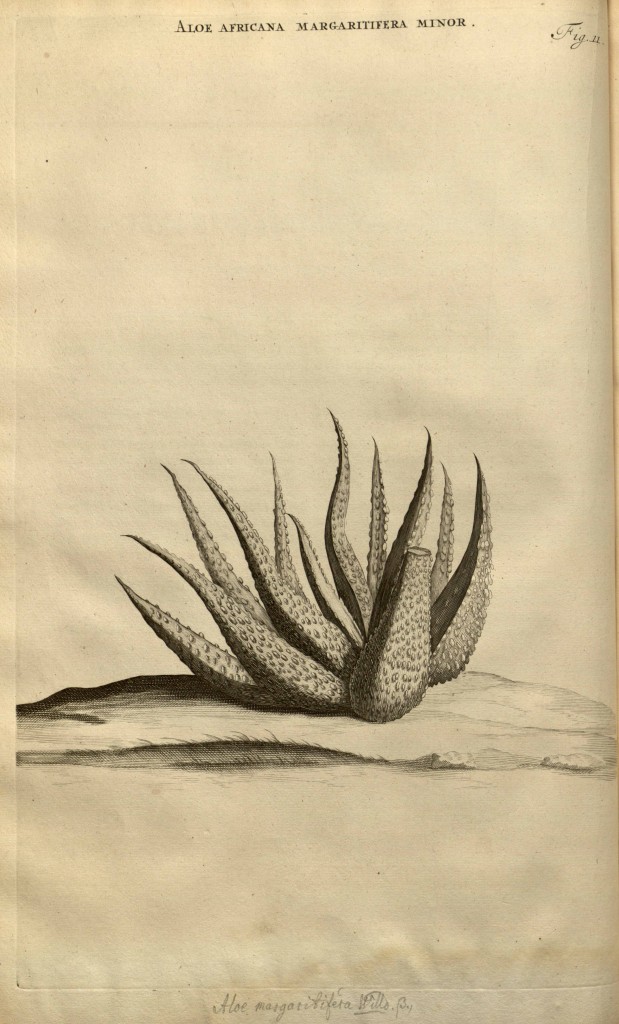 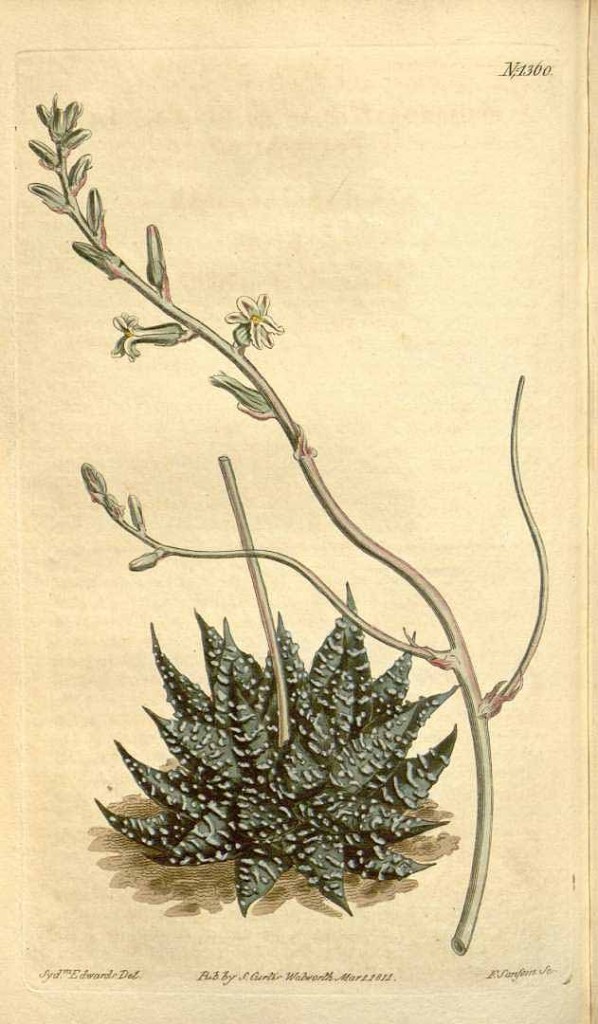 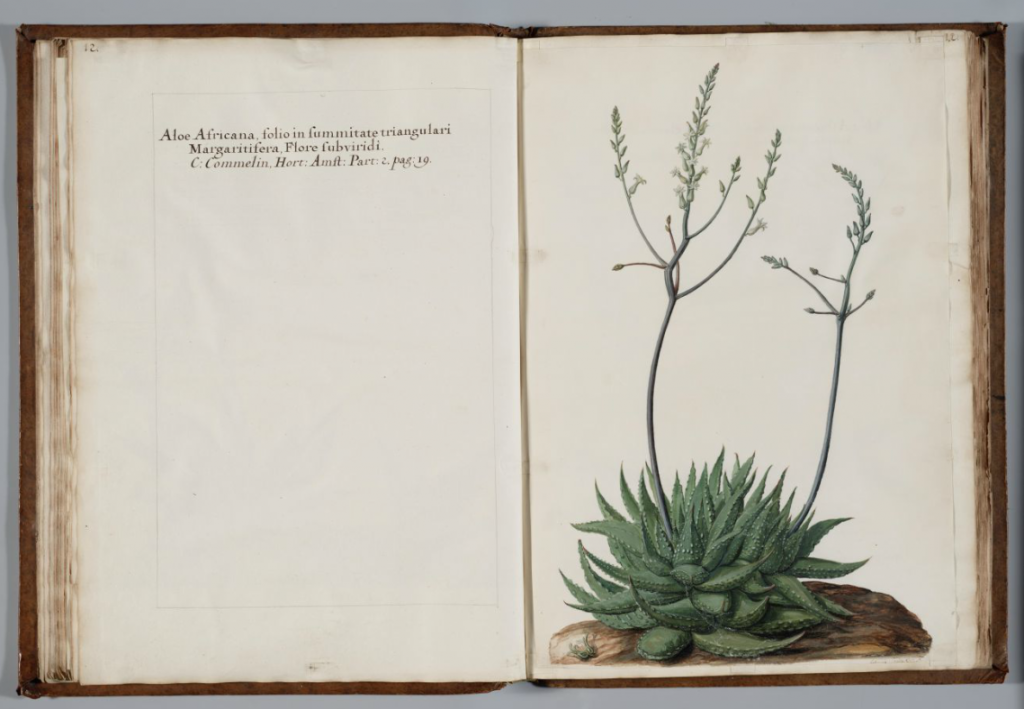 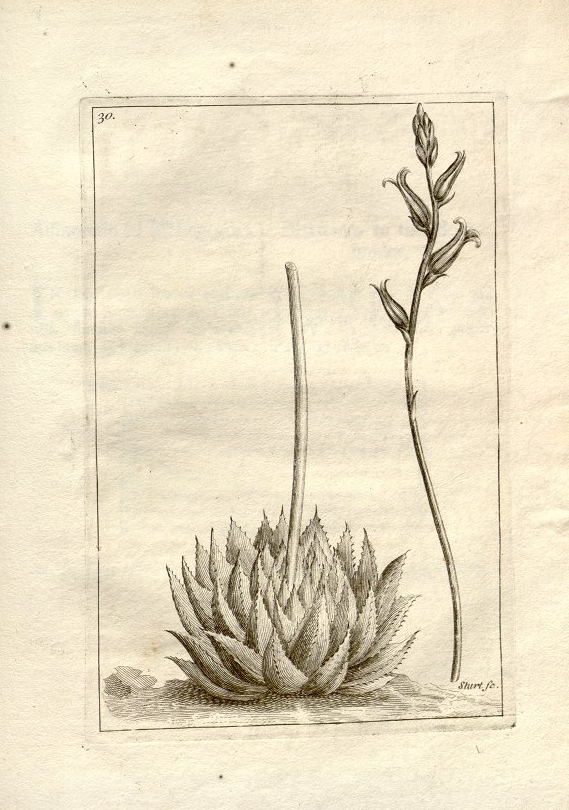 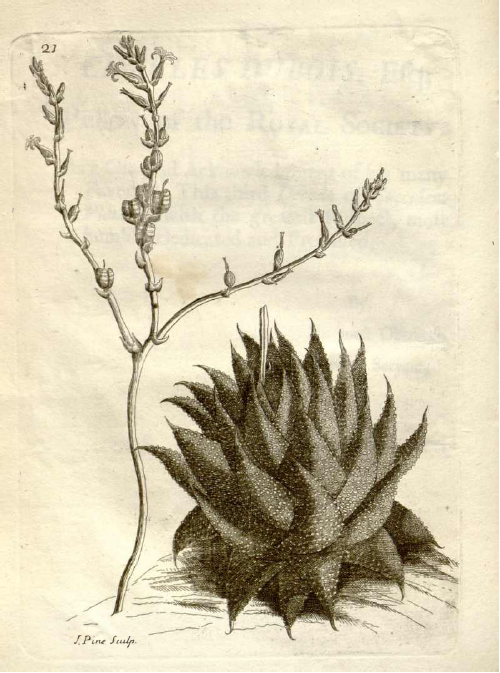