1982 – This is a small species occurring immediately east of Heidelberg.  It grows deeply imbedded in moss and lichen and although the leaves have a distinct end area they are markedly acuminate.  Known only from one locality, there is a related population at Matjestoon to the southwest in which the plants have longer recurving leaves, and another at Bredasdorp similar to the last.  Together these three populations have no obvious affinities with any other species in the complex.  Heidelberg is a very significant area for haworthias, as species such as H. turgida, H. magnifica, H. floribunda and H. retusa all occur nearby.  H. heidelbergensis is not continuously variable with any of these.  It is a winter‑growing species, invariably non‑proliferous and difficult in cultivation.  The occurrence in moss and lichen suggests that it requires more shade than usual, as well as a distinct summer resting period.

1999 – This has proved to be the most surprising species among all the collections of the last ten years.  Many collections have been made including at all the compass points immediately around Heidelberg, although those north are really considered hybrid with H. turgida.  As Esterhuysen (1992) pointed out, the type locality is probably west of Heidelberg as recorded in Smith’s collecting records and on his type specimen.  This is cited in the published description simply as ‘Swellendam District’.  It extends further east towards Riversdale,  westwards to Bonnievale and is common east and north of Bredasdorp.  It has proved to be a major role player among the species in that area apart from its association with H. emelyae already dealt with.  The populations around Heidelberg show evidence of direct introgression with H. turgida and cast new light on the relationship of that species with H. retusa.  H. heidelbergensis is apparently the eastern counterpart of H. mirabilis and these two species never co-occur.  H. serrata also cannot be excluded from discussion of this species (see H. serrata).  At its westernmost limit at Bonnievale, it is confounded with H. maraisii var. meiringii.  At the type locality it is rather atypical, an oxymoronic statement.  Here the leaves are erect, but with a distinct end-area and there are not many leaves.  Characteristic of the species is, however, the abundance of individuals at each site and their density in colonies usually on slightly southern slopes and in thick moss.  The leaves may be smoothish and cloudily translucent or with translucence between veins on the upper leaf surfaces.  The leaves tend to spread and recurve rather than being distinctly retused or with a swollen end-area as in the type.  This is also one of the main feature separating H. mirabilis from H. maraisii, although it is by no means an absolute discriminant.  The colour is also usually a reddish tinted greenish-brown.  At Bredasdorp the population is greener than normal and the plants are like miniaturised H. mirabilis.  Several varieties are distinguished to facilitate perception of this species.

a. var. heidelbergensis
Resende in Feddes Repert.Spec.Nov. 48:114(1940) suggested a change in the rules of nomenclature so that if a name proved not to be the true stem form (in other words not central to the circumscription of the species) the type should be changed for one that was.  This is a case where that rule would prove quite useful.  A manuscript concerning the pivotal role this species plays in the Southern Cape has been submitted to ALOE.  Despite the major role this species plays in relation to all the species in the Southern Cape, not one of the illustrations in Bayer (1980), ‘The story of Haworthia nitidula’ depicts this.  Larger plants occurs around Heidelberg and mid-way to Riversdale.  The actual locality of the collection is rather odd, as Dekenah pointed out the locality to the author as east of the town, whereas there are two collection of Smiths received from Dekenah, one east and one west.  They are virtually identical and Esterhuizen (1992) confirms this.

Differs in being small, to 3cm φ, and in being light yellowish-green and well spined.  (A var. heidelbergensis foliis parvioribus flavo-virentibus pallidis et spinosis differt).

North of Bredasdorp the plants resemble miniaturised forms of H. mirabilis var. sublineata and have the same plain green colour.  The leaf-tips are also notably translucent.

This is the commonest variety in terms of population distribution.  The plants are quite small and very easily mistaken for erect-leaved forms of H. maraisii despite the general absence of ‘cloudy’ translucent windows in the leaves of the latter species.  Although populations are often small, they are usually very dense.

Differs in the more recurved leaves with a distinct transparent end-area to the leaves.

This appeared as an article in ALOE 38:31 (2001).  Unfortunately there was a problem with illustrations and captions and these are corrected here.  A comment is also added as an addendum to respond to criticism by I.Breuer published in Alsterworthia 2:13(2002).

Introduction:
I described Haworthia serrata in 1973 (Jl S.AFr.Bot.39:249, see Figs.1) from Oudekraal, southwest of Heidelberg.  I commented then on the wisdom of describing a new species when “the recognition, estimation of taxonomic rank and circumscription of elements in Haworthia…” was so problematic.  The new species was said to resemble H. emelyae var. multifolia (Figs.2).  In respect of its distribution, I said it was closest to H. heidelbergensis at Heidelberg (Figs.3 JDV87/1) and as at Matjestoon (Fig.4 JDV87/3), and also to H. sublimpidula at Swellendam (now known to be H. floribunda var. major (Fig.5 MBB6859, taxonomically with little connection to H. rossouwii).  The implication was that it could have been taxonomically related to those elements in terms of geographic distribution.  I was still puzzled by the relationships of H. serrata when I wrote (New Haworthia Handbook :55, 1982) that collections by C.Burgers from the Coastal Limestones might throw more light on the matter (Fig.6 MBB6985 H. mirabilis var. calcarea).

END_OF_DOCUMENT_TOKEN_TO_BE_REPLACED

I wrote an article about Haworthia rossouwii in Aloe 38:31(2001), in which I resurrected this old name to replace that of my own H. serrata.  This was necessary because I had found this plant (because of its localisation and its abundance there, it is better to say ‘this species’) at two places near Bredasdorp as opposed to where I had described my species from near Heidelberg.

One needs to know something about the geography and geology of the Southern Cape (and the Overberg as a part of it is also known) to really follow all the ramifications of any discussion about Haworthia, including this one.  In fact one needs to know a whole lot more, and I will also try to explain that and its implications for the collector and Haworthiophiles.  This “whole lot more”, I will call the Corporate Mind because it includes so much – so remember CM!  If I regard H. rossouwii as a species, I have to consider all the plants and all the places where they grow in order to determine the nature of this particular system of living things.  As I explained in my article, there is a problem with the fact that little is actually known about the Haworthias of the Overberg.  They occur in small populations scattered over a fairly wide area which has been heavily impacted on by agriculture.  Thus about 90% or more of the Overberg is now wheatfield or pasture.  Like Gasteria carinata, which is also a Southern Cape species, Haworthia is associated with rocky outcrops and thus also with the geographical erosion and drainage systems of the area.  It is quite probable that cultivation has had relatively very little impact on Haworthia in terms of actual available and suitable habitat.

END_OF_DOCUMENT_TOKEN_TO_BE_REPLACED

Since the publication of Haworthia Revisited (Umdaus 1999) I have written Haworthia Update Vol.1 (Umdaus 2002), and Haworthia Update Vol.2 is now in press.  It has some 700 pictures and several maps and focuses largely on the vexing question of how we classify and name the plants in the social environment we have created.

In one chapter I demonstrate how difficult it is to distinguish H. mirabilis and H. maraisii and admit that I can no longer see that distinction.  In this article I want to illustrate a population which shows that my problem is not limited to those two names.  This is about a population on the farm Klippoort that is at the extreme southeast of the Worcester/Robertson Karoo.  It is south of the Riviersonderend River just before the confluence with the bigger Breede River.  The Riviersonderend runs south of the range of mountains which effectively forms the northern boundary to the distribution of H. mirabilis.  East of Stormsvlei, the river cuts through the tail of the mountain range and turns northeast to link up with the Breede River.  The confluence lies just south of the Bonnievale/Drew/Mardouw area which is populated by a dense array of variants of H. maraisii and H. heidelbergensis that cannot confidently be regarded as two different species either.

I have given my record a new number MBB7513, because I do not think I ever made a formal record.  I am not even certain when I first saw the plants there at Klipfontein but I do know that I was again there in 1996.   I was familiar with plants in the nearby area which I had no doubt were H. maraisii and remembered the Klippoort plants as small with rather erect incurving leaves.  In October 2005 Kobus Venter, my wife Daphne and I were in the area and saw a Drosanthemum which I knew was important to Dr H. Hartmann.  To show her these plants in February 2006 I had to get permission from a new landowner and this led to a curious exchange with the original owners (Mr and Mrs Urschel) who had retained the main part of Klipfontein.  To demonstrate the significance of the area and to fuel her interest, I thought I would show Mrs Urschel H. maraisii on the part of the farm they had retained.

END_OF_DOCUMENT_TOKEN_TO_BE_REPLACED 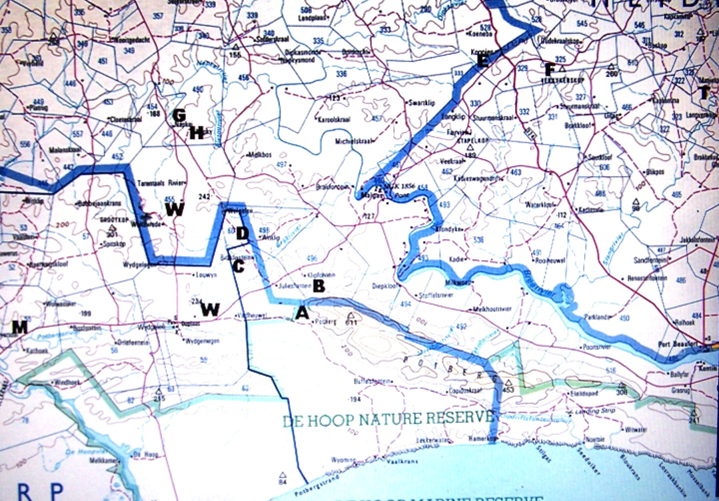 In an earlier article I described how Haworthia floribunda (at B on map) transmutes eastwards to H. variegata (at A on map) between the localities Klipfontein and Kleinberg, which are north of the Potberg Mountain. This is despite the fact that they both occur in close proximity at the northwestern end of the mountain. Difficulties now arise in the immediate vicinity to the west (at point W) and this extends northwestwards (to points C and D on the map).  While we can confidently ascribe names to floribunda and variegata at those particular sites, the plants to the west and northwest are confounding.  They fall into a no-man’s-land of these two species with H. mirabilis, H. maraisii, H. heidelbergensis and even H. mutica thrown in.