Abstract:  The name Haworthia reticulata (Haw.) Haw. is upheld for a species occurring in close association with H. herhacea (Mill.) Stearn in the Robertson Karoo.  Evidence is presented to show that H. haageana v. Poelln., H. hurlingii v. Poelln. and H. intermedia v. Poelln., together with published varieties of these, have their origin in the same species complex.  These species are reduced to synonymy in the single species H. reticulata.  It is suggested that H. subregularis Baker may also be synonymous.

Introduction:  There is reason to believe that the nomenclature in Haworthia is often not compatible with the distribution and variability of species of this genus as they occur in the field.  The object of this paper is to clarify the name H. reticulata (Haw) Haw. and apply it to field populations.

When Haworth originally described the species under the name Aloe reticulata, no exact locality was given.  Ker-Gawler published a description, accompanied by a coloured plate, of a plant which he named A. arachnoidea Burm. var. reticulata (Haw.).  Haworth (1812) apparently accepted the plant illustrated as conspecific with his species when he reinstated it as Haworthia reticulata.  As no type of his species appears to exist among Haworth’s specimens (Fielding-Druce Herbarium, Oxford), the plate t.13l4 in Curtis’ Botanical Magazine is regarded as the most acceptable neotype of H. reticulata (Haw.) Haw..

Jacquin (1804) described A. pumilio which, from the illustration, is considered to be nearer to H. herbacea (Mill.) Stearn than to H. reticulata because of the compact growth habit. Ker-Gawler (1811) erroneously included Jacquin’s species in synonymy with his A. arachnoidea Burm. var. translucens (Haw.) and Haworth, without seeing Jacquin’s description, followed suit when he reinstated H. translucens Haw.  Salm Dyck (1817) incorrectly allied Jacquin’s species with H. reticulata.

There is little doubt that the plant depicted by Ker-Gawler is associated with natural populations occurring in the Robertson Karoo.  Von Poellnitz (1938) recorded the distribution as ‘Worcester, Robertson and Swellendam districts and perhaps also in the Port Elizabeth district, but perhaps not in the Grahamstown district.’  G. G. Smith (unpublished data) cites Schonland’s identifications recorded in the Albany Museum Records (254, 1907-13). These identifications are certainly incorrect as the specimens are from the H. cymbiformis Haw. complex of the E. Cape.  This is also possibly true of H. subregularis Baker.  As a result of intensive field investigations into the variability, distribution and affinities of Haworthia in the Robertson Karoo, it can be positively stated that this is the locality for H. reticulata and that several more recent names and varieties are superfluous.  These are mostly species published by von Poellnitz, and it appears that either no type specimens as such were preserved, or they did not survive the bombing of Berlin.  Consequently his names can only be typified by single photographs in the Botanical Museum, Berlin-Dahlem, or as published with the species descriptions.  Some of these photographs are of poorly grown plants and, like pressed and dried material, often do not give an adequate impression of the living plant.  Fortunately it has been in some instances possible to determine the type localities with a fair degree of certainty and these have been thoroughly investigated.  Where species have been adequately illustrated at publication, and locality determined, no further reference to types has been made.

It is well-known that von Poellnitz received much of his material through W. Triebner in South-West Africa.  It is also generally accepted that errors occurred which resulted in localities for collections being transposed or confused, and in collections being attributed to the wrong collectors.  A frequent error is one in which the town from which plants were sent to Triebner by collectors is cited as the locality at which the plants were actually collected.  One such instance involves H. intermedia v. Poelln., which was described from McGregor where the collector, Mr. 6. J. Payne, lived.  The actual locality given by Payne (private communication) is the farm Buitenstekloof near Langvlei, Robertson.  Originally the species was described with flower unknown, and when von Poellnitz later (1938) added a descnption’of the flower and the second locality, Scottburgh Farm, Port Elizabeth, it became certain that a second species is involved.  This is substantiated by the description and photograph of a species published under the name H. intermedia v. PoelIn. by  J. R. Brown in the American Cactus & Succulent Journal, which is clearly not the same plant as that from Buitenstekloof.

Field investigation:  Collecting was done throughout the Robertson Karoo and adjoining areas.  Reference was also made to records and photographs compiled by G. G. Smith and to preserved material in the Compton (NBG) and Bolus (801) herbaria.  H. reticulata was found in close association with other species elements and in some localities hybridising with these to form hybrid swarms.  The collections KG696/69 and KG178/70 involved such hybrid swarms; the former with H. herbacea and the latter with H. notabilis v. Poelln.  The collection KG159/70 includes forms which tend towards H. herbacea, but does not appear to be of direct hybrid origin as in the case cited.  It was noted that there was an apparent reduction in average plant size from west to east.  Each population was also found to be variable, including compact forms with shorter, as well as forms with longer, acuminate leaves.  Marginal denticulation was variable, with occasional forms almost totally glabrous.  Even in such forms, however, the keel was minutely denticulate at the leaf apex.  At the type locality for H. hurlingii v. Poelln. (KG654/69, 47/70) the plants were smaller than normal and the rosettes short-leaved and compact.  The leaf tips were sometimes not incurved, simply because the leaves were too rounded and turgid.  Similar forms were found to be common at the site KG690/69 and also observed at the site KG662/69.

The site KG105/70 at Buitenstekioof was regarded as having a typical variable population, and with the correction in locality, H. intermedia must be excluded as a valid species.  Two collections were made south of Bonnievale (KG221/70, 222/70) and it was difficult indeed to determine in which species these should be classified.  The leaf and rosette arrangement suggest H. herbacea, but proliferation, growth habit and flower are more nearly allied to those of H. reticulata, where they are therefore placed.  These collections also cannot be considered without reference to forms which occur in the hybrid swarm between H. reticulata and H. notabilis at KG78/70.  There are specimens from the Bonnievale area in herbarium collections which cannot be positively referred to either H. herbacea or H. reticulata, but as the former species has not been collected this far east, it is assumed that they are from the same population sampled south of Bonnievale.  H. guttata Uitew. is described from between Robertson and Bonnievale and there is a suggestion that this is only a form in the H. reticulata complex, especially in view of the forms occurring south of Bonnievale and in the hybrid swarm.  However, it is more likely that this species was drawn from a series of plants which appear to be allied to H. schuldtiana and further investigations into the relationships between these species are required.

As von Poellnitz related H. integra v Poelln. with H. reticulata, it was thought that this species may also have had its origin in the Robertson Karoo.  In the Fourcade photographs (Compton and Bolus Herbaria), based on F. R. Long’s collection, photograph no.28 is said to be of type material but bears no relationship to any of the species discussed here.  Photograph no.244, also labelled H. integra. is undoubtedly of H. batesiana.  As most of Long’s collection was named in association with von Poellnitz, some weight needs to be given to the Fourcade photographs.

G. G. Smith identified a plant from Tweefontein, near Worcester, as H. subregularis Baker and suggests that this species is synonymous with H. haageana v. Poelln.  The illustration by Baker (1870) of the flower of H. subregularis supports this view.  The bud-tips are, however, drawn entire and the leaves somewhat cymbiform.  While it is strongly suggested that this species is merely a variant of H. reticulate,  reduction to synonymy may be premature.  Further consideration needs to be given to the possible alliance of H. subregularis to H. cymbiformis Haw. occurring in the East Cape.

Discussion:  During the investigation of Haworthia reticulate, 107 separate collections of Haworthia were made in the Robertson Karoo alone.  The various species elements are differentiated into localised populations, in many cases with precise ecological requirements.  In Haworthia pollination is by insects and the extent of spatial separation of conspecific populations suggests that interbreeding does not occur.  Thus most species seem to exist as a series of physiologically and perhap genetically distinct races, each in a particular ecological situation.  As hybridisation occurs very readily in cultivation across even the more easily recognised species, there is no suggestion that these ecotypes are fixed genetically.

It is clear that a species concept based on leaf shape and arrangement alone is unlikely to produce a satisfactory classification, as this will tend to be a narrow concept to accommodate ecotypic differences.  Conversely, a wider concept may preclude use of the more obvious foliage characters because of this same variability.  It does appear that geographic factors are of considerable significance and that river drainage systems and topography may form an essential basis for deciding species limits.  Thus, one would expect to find species most clearly differentiated in the higher inland areas of the drainage systems and introgression at the lower confluences.  This seems to be the case with H. herbacea and H. reticulata.  The latter occurs primarily on south-facing slopes of the Langsberg foot-hills and north of the Breede River, while H. herbacea is widespread in the area south of the Breede River and west of the westerly limits of H. reticulata.  Anomalous populations occur between these limits along the Breede River of Robertson and, together with the riverine Bonnievale populations, may represent the results of species introgression or, alternatively, may be ancestral forms from which the two species descended.  More evidence is required to substantiate these observations and this is not likely to be forthcoming until characterisation of species is more adequate in the genus.  There can be no doubt that geographic considerations must figure prominently in the creation of species concepts.

Conclusions:  The variability and distributions of each of the local populations sampled in this investigation invalidate the taxa H. haageana, H. hurlingii and H. intermedia, all of which are reduced to synonymy under H. reticulata:-

The species is typified by Ker-Gawler’s illustration in Curtis’ Botanical Magazine, t. 1314 (1810).

The collections cited in this paper are Karoo Garden (KG) collections, now in cultivation at Worcester, South Africa. The localities of cited collections are as follows:-

Acknowledgement. The writer wishes to thank Mr. F. J. Stayner, Curator, Karoo Gardens, Worcester, for his contribution, assistance and encouragement during the course of this investigation.  He also wishes to acknowledge constructive criticism and changes suggested by Mr. C. Walker, and gratitude is also extended to Mr. J. Rourke of the Compton Herbarium, Kirstenbosch. for invaluable comment and criticisms. 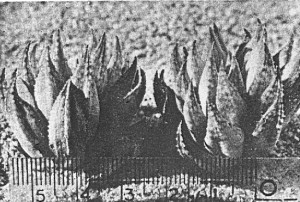 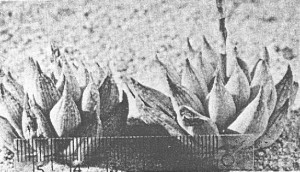 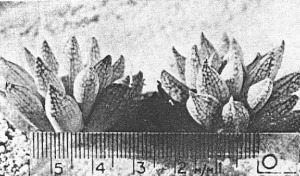 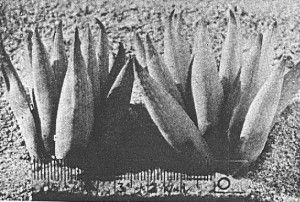 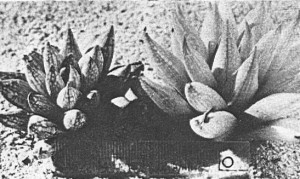 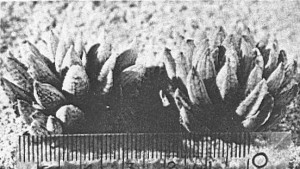 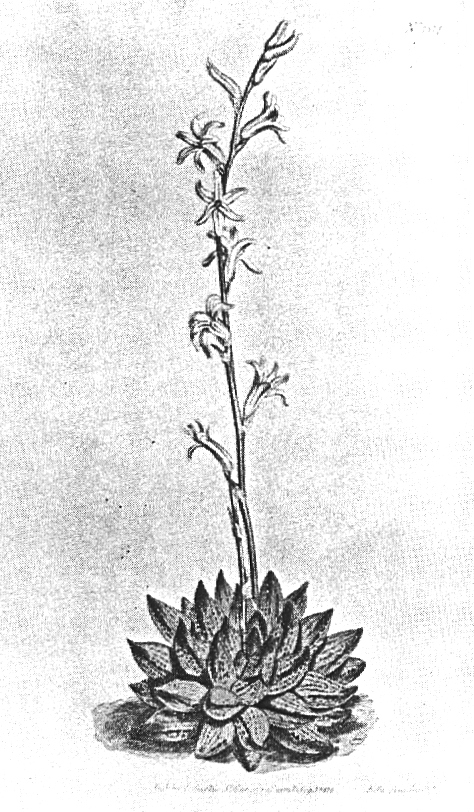