Abstract:  The application of the name Haworthia herbacea (Mill.) Stearn to field populations is discussed.  It is concluded that this name applies best to the predominant complex occurring in the western and south-western Robertson Karoo.  The species H. aegrota v Poelln., H. submaculata v Poelln., H. luteorosa Uitew. and the variety H. pallida var. paynei are shown to have their origin in the same complex, and are therefore reduced to synonymy.

Introduction:
The object of this paper is the application of the name Haworthia herbacea (Mill.) Stearn to field populations.  H. herbacea is one of the earliest species of Haworthia described, being typified by the illustration t.131 in Boerhaave’s Index alter Plantarum (1720).  However, the history of the name is confused and it is not certain that it has always been applied correctly.  The present locality and identity of the species are also uncertain.  Bradley illustrated a plant in his History of Succulent Plants (t.30) which he regarded as synonymous with Boerhaave’s 1.131, but this was frequently confused with a plant illustrated in Commelin’s Praeludi Botanica (1703, t.27) and now known as H. arachnoidea (L) Duval.  The epithet pumila was used by Linnaeus (1753) to include the present species H. margaritifera, H. arachnoidea and H. herbacea.  Miller (1768) first applied the epithets arachnoidea (Commelin’s t.27) and herbacea (Boerhaave’s t.l31) at species level, yet pumila was used by Aiton (1789) for Boerhaave’s species at varietal rank.  De Candolle (1799) raised the same plant to species level as Aloe atrovirens whereas Haworth (1804) used the name A. pumila again.  In 1821 Haworth adopted the name atrovirens after De Candolle, and Salm Dyck later noted the correct name, herbacea. although retaining atrovirens.  The necessary observance of priority was implemented by Stern (1939).

Jacquin (1804) pictured a plant which he named A. pumilio.  The treatment of this species together with the new species H. reticulata Haw., H. translucens Haw. and H. pallida Haw. by later authors gives some clue to the probable relationship of these species to field populations.  Ker-Gawler (1810) noted that Miller had referred to a new variety of H. herbacea produced from seed and presumed this to be Haworth’s H. reticulata.  This was refuted by Haworth and, moreover, this latter species can be clearly related to field populations.  It is however probable that H. pallida, which was given to Haworth by Aiton ex hortus Kew, was of seedling origin with H. herbacea parentage.

It is certain that H. herbacea must have its origin in plant populations close to the early development of the Cape Colony.  The identification of H. palIida from the Robertson area and H. herbacea from Montagu, Barrydale and Bonnievale areas by von Poellnitz and Smith support this contention.  However, neither author positively associated these names with any particular area or collection.  Von Poellnitz and Uitewaal named a number of new species and varieties from what is undoubtedly the same large species complex in the Robertson Karoo.  These are H. pallida var. payneii v Poelln., cited from Robertson and actually coming from McGregor, then H. luteorosa Uitew., cited from ‘probably in the vicinity of Grahamstown’, H. aegrota v. Poelln. and H. submaculata v. PoelIn., both cited from ‘the environs of Worcester, Swellendam, Caledon and Bredasdorp’, and finally H. guttata Uitew. from between Robertson and Bonnievale.  The variability and extent of natural populations of Haworthia species in the Robertson Karoo suggest that these species could have originated from a single species complex to which the name H. herbacea should be applied.  This complex is situated widely across an area intimately associated with early Cape travel and exploration.  The connection between this complex and the H. reticulata complex in the same area, demonstrate that the relation of H. reticulata, H. pallida and H. herbacea in early literature is not fortuitous.

Field investigation:
As reported for H. reticulata (Bayer, 1972), collecting was done throughout the Robertson Karoo and adjoining areas.  Use was also made of collecting records by G. G. Smith, G. J. Payne and F. R. Long and of preserved material in the Bolus and Compton Herbaria.  The Robertson Karoo proved to be extremely well endowed with Haworthia species and several population complexes suggested themselves for consideration as H. herbacea.  A species most abundant in the area and best fitting general concepts and descriptions of H. herbacea led to the adoption of this name for the complex now discussed.  H. herbacea was found in the Karoid Broken Veld of the western part of the Robertson Karoo, although several collections bordered either Machia in the north or Mountain Renosterbos in the south.  Altogether 24 discrete populations were noted and sampled.  At three sites, the Karoo Garden collection numbers KG634/69, KG52/70 and KG141/70, H. herbacea was found in close association with forms of H. schuldtiana v. Poelln.(now H. maraisii).  At one these sites, KG141/70, H. schuldtiana var. maculata v. Poelin. (now H. maculata) occurs and a hybrid swarm is evident.  Hybrids here can be matched completely with the description and illustration of H. submaculata.  At the locality KG696/69, H. herbacea hybridises with H. reticulata also producing a hybrid swarm.  Further investigation and evidence suggest that the hybrid swarm at the site KGI78/70 does not involve H. herbacea as previously suggested (Bayer, 1972), but rather H. notabilis von Poelln. (now H. maraisii var notabilis).  At the site KG94/67 H. herbacea, H. reticulata and H. setata (now H. arachnoidea) are in close proximity and no hybridisation was observed.

The collection KG95/69 was made at the type locality as pointed out by Mr. Payne for H. pallida var. payneii.  Two further collections (KG52/70, KG133/70), also in the McGregor area, comprise plants which are distinctly only smaller forms of H. herbacea.  The collection KG159/70 as already discussed (Bayer, 1972) is anomalous although considered to be near to H. reticulata.  Plants from this locality may fit the description of H. pallida better than specimens from the more typical H. herbacea populations.  The collection KG174/70 is similarly anomalous, the plants being small, very proliferous and frequently with reduced marginal spines.  Variation in H. herbacea does not appear to be as great as for H. reticulata.  The degree of spination is variable and heavy, large plants may be found as well as smaller, lightly spined specimens. Plants at any given locality tend to be similar, although local population characteristics may not be evident in cultivation.

H. aegrota is known to have been found in the area between Worcester and Bredasdorp (Long 763. Venter 6) and plants matching this description are found in the populations of H. herbacea which abound in that area north of the Riviersonderend Mountains – the southern border of the Robertson Karoo.  H. luteorosea was described from ‘probably the vicinity of Grahamstown’ and was characterised particularly by the flower colour and shape and arrangement of the perianth lobes.  H. herbacea does in fact show quite a marked range of flower colouration and plants fitting Uitewaal’s description were collected at Mowers, east of Worcester (KG637169).  It should be noted that H. reticulata is characterized by its pinkish flowers and H. herbacea by beige coloured flowers.  Variants are,.however, common and the hybrids in particular may have striking flowers.

Conclusion:
The abundance, characteristics and variability of the plant populations investigated show beyond reasonable doubt that the name H. herbacea must be applied to plants from the Robertson Karoo area.  No species are known closer to and more plentifully in the exploration routes from the early Cape Colony.  The presence of several other species in the same area, to which the early descriptions of H. herbacea could perhaps be fitted, may provoke argument.  Forms within the H. schuIdtiana complex (including H. guttata), a complex in the Klaasvoogds area east of Robertson and a complex immediately west and east of Bonnievale cannot rationally be excluded from consideration.  Species complexes are also known to the writer from the Touws River and Montagu areas which could possibly be related to Boerhaave’s plant.  The fact remains that descriptions and records for most Haworthia species are not adequate for locating or identifying plants in the field, or for separating the many populations and species complexes which occur.  The best solution thus appears to be the selection of a population most likely to have been sampled and adequately fitting the description for the species, and to attach the name H. hierbacea to this.  In this case the decision to use the name for a population complex intimately associated with H. reticulata, and from which association the name H. pallida probably arose, is surely the correct one.  There is no doubt that the variety H. pallida var. payneii and the species H. aegrota, H. submaculata and H. luteorosea had their origin in this same population and must be regarded as synonymous with H. herbacea.

The writer’s concept of the species is thus summarised as follows:-

The collections made during this investigation were as follows :-

Acknowledgement:
Gratitude is expressed to Mr. F. J. Stayner, Curator of the Karoo Garden, Worcester, for his encouragement and assistance during the course of this work and for the photography.  Acknowledgement must also be made of the copiously and meticulously annotated notes and manuscripts compiled by Mr. G. G. Smith and now deposited in the care of the Compton Herbarium.  Appreciation for access thereto, and to the Compton Herbarium, is expressed to the Director, Miss W. E. Barker.  Gratitude is also extended to Prof. E. A. C. 1. E. Schelpe for access to the Bolus Herbarium and to Dr. J. Rourke and Mr. J. Jessop for constructive criticism. Acknowledgement is also made of the kind assistance and interest of Mr. C. Walker, Stockport, England. 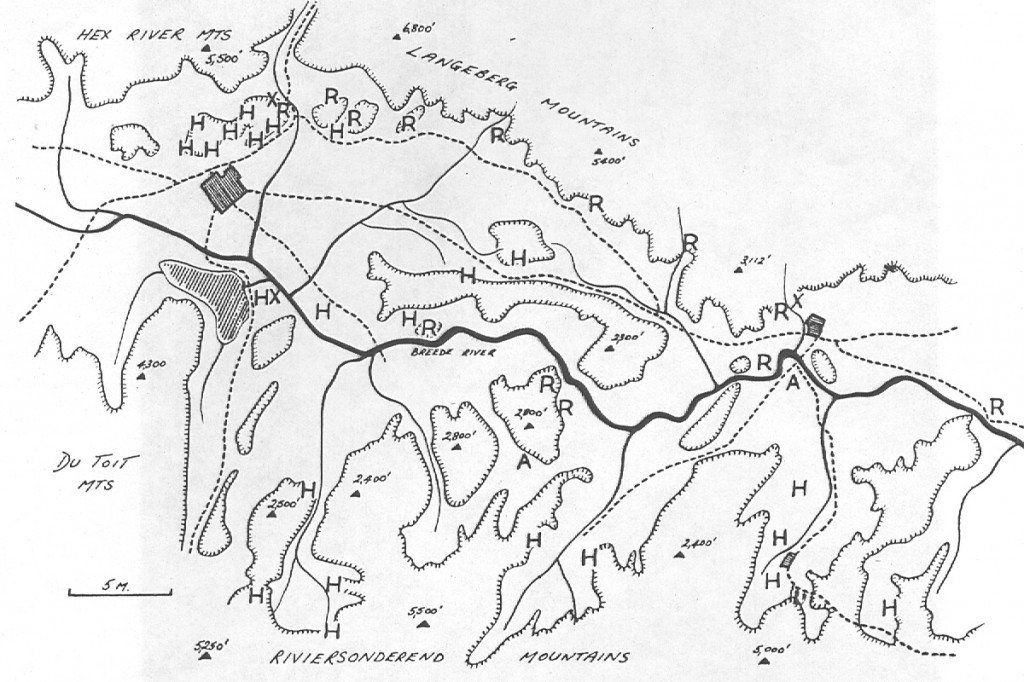