Written for, and then printed and distributed by Haworthia Study Group, New South Wales – October 1970.

Much of the confusion in the taxonomy of the genus Haworthia could have been avoided if more attention had been paid to localities and inherent variability of the species.  The tendency has been to base species on single specimens and to regard the species as variable concepts subject to personal opinions.   According to Stebbins in his book “Variation and Evolution in Plants”, a species comprises a system of populations separated from each other by complete or sharp discontinuities in their variation patterns, and this must have a genetic basis.  Therefore there must be isolating mechanisms to prevent transfer of genes. In Haworthia, most (not all) of the species are found in rock formations and stable situations at moderate altitudes, and hence the populations are well spaced.  Haworthias are also insect pollinated, mostly by solitary bees, and as stated by Clausen in “The Evolution of Plant Species”, it is logical that spatial separation of the plant populations coupled with flight limitations of the pollen vectors, will with time have led to differentiation of highly localised populations.  A further problem in Haworthia is that the species do in fact exist at different stages of differentiation.  Thus one may be forced for practical reasons to regard a widely ranging series of varying populations as a single species, simply because the degree of  inter-gradation and variability precludes any other alternative.  If there is an alternative, it is to recognise varieties in the sense that this concept has been used in the past, i.e., to apply to individual variants and forms.

H. triebneriana, v. Poelln., is a good example, although not an exception, of what one may find.  In some cases the variants may have a geographic basis, and it is clear from field observation that H. badia, v. Poelln., H. emelyae var beukmannii, v. Poelln., and H. triebneriana var sublineata are such variants.  The variety rubrodentata may also be, whereas the varieties pulchra, lanceolata and depauperata (all attributed to v. Poelln.) are from the same locality at Stormsvlei.  According to the collector, Mr. G. L. Payne, von Poellnitz incorrectly cited the var lanceolata from Robertson.

A second example is of the two species H. reticulata, Haw. and H. herbacea (M II.) Steam, which have been intensively studied over their distribution range.  Here one finds three distinct stages of evolutionary differentiation.  In one area one finds populations (not individuals) which are quite anomalous falling neither into one species nor the other.  These appear to represent non-differentiated populations which may be remnants of the ancestral forms. In a second area one finds clearly differentiated populations of each species hybridising (introgression) to create an extensive hybrid swarm.

The third instance is within the one species H. reticulate,which varies quite widely over its range with each population intergrading into the next.  This is a classical example where the species H. haageana, H. intermedia, H. hurlingii (all v. Poelln.) and H. guttata, Uitew., are really all forms drawn from various points in the range of the parent species, in this case H. reticulata (the correct locality for H. intermedia is stated by Mr. Payne to be at Buitenstekloof, which is within the range of H. reticulata).  What has now apparently happened is that migration, probably due to water dispersal, has resulted in two clearly different forms growing en masse near one another.  If one ignored the evidence of variability over the whole species range, one would be compelled to regard each as a distinct species.

With these thoughts in mind, we can now examine some variation in the species H. glauca described by Baker in 1880.  The locality was given as the Kalahari Region, Orange Free State, which is quite imiprobable for the species.  It is now generally accepted that this species is located in the Zuurberg mountains east of the Sundays River and north-east of Uitenhage.  However, the Zuurbergs have western counterparts in the Kleinwinterhoek and Groot River Heights which all together form a chain of mountains running in an east-west direction separating Jansenville and Steytlerville, and extending from near Grahamstown in the east to Willowmore in the west.  These form part of the drainage system of the Sundays River which extends northward to include Graaff Reinet.

In 1932 von Poellnitz described the variety H. herrei var. depauperata and cited the localities Sundays River between Steytlerville and Port Elizabeth (1932), Paardepoort, Jansenville and Somerset East (1938).  The first locality is vague and it is unfortunate that such citations detract so much from von Poellnitz’s work.  In 1941 Resende recorded H. herrei var. poellnitzii, but it appears that this is intended to be the var. herrei as Jacobsen (1960) observes.

H. armstrongii and H. eilyae were both described by von Poellnitz in 1937.  The former species is cited from Adelaide which is actually the town in which the original collector lived and from which the plants were sent (a common error frequently to be laid at Triebner’s door).  From unpublished notes and records of Dr. Fourcade and Major Long, who together compiled a set of photographs and records of named plants, and from Mr. G. G. Smith’s collecting data, it appears certain that the actual locality was Spring Range, some 6 miles north of Uitenhage.  H. eilyae was cited from Kleinpoort while the variety H. eilyae var. zantneriana, Resende, was described in 1943, locality unknown.

In 1941 Resende had also described H. carrisoi from the Zuurberg mountains, and the fate of this species is adequately dealt with by Smith (Views on the Naming of Haworthias, 1947) and by Resende (Variability and Taxonomy in the Genus Haworthia).  H. carrissoi is undoubtedly a synonym for H. glauca.  Two further species were described by von Poellnitz, H. jacobseniana from Miller which is nearer to Willowmore than to Jansenville, and H. jonesiae from Steytlervile (both 1937).

The localities cited for the above species and varieties, considering their similarity, alone tends to belie their validity.  If it is accepted that a variety must also satisfy isolation requirements of some degree, in addition to consistent morphological variability, the situation calls for examination.

Evidence available consists of the photographs as published with the descriptions and also at other times, such as by Brown in the American Cactus and Succulent Journal, by van Woerden in Succulenta and by Resende in Succulenta Africana.  There are also the records compiled by Fourcade and Long which are of particular value.  Major Long was a one-time Director of the Port Elizabeth city parks department and a Haworthia enthusiast.  His collection was compiled during the years 1930-40 and he was in close contact with von Poellnitz and with collectors such as Armstrong, Mrs. Emely Ferguson, Mrs. van der Byl, Mrs. Eily Archibald, Mrs. King and Mrs. Jones, to name but a few.  In many cases plants photographed by Dr. Fourcade were of plants submitted by the original collectors after whom they were named, such as H. herrei, H. eilyae, H. armstrongii, and H. jonesiae.  Only six sets of these photographs were compiled of which four can be accounted for, one is among Long’s papers, one in the Bolus Herbarium, Cape Town, and two among Smith’s papers in the Compton Herbarium, Kirstenbosch.  Many photographs were taken by Smith of plants collected by himself or his collaborators and these include of:-

The identifications quoted are those Smith and are not entirely in agreement with the types, but certainly as good as could have been expected under the circumstances.  As will be seen inherent variability precludes either accurate identification or segregation of the various forms into the categories imposed by the described taxa.  The plants collected by Smith and numbered GGS2754, 3648, 3655, 3644 and 2924 still survive in the collection now at the Karoo Garden.   In addition there are his plants GGS7048-50 and 7059 from Campherspoort, 3660 7 miles Miller to Willowmore and 6917 from between Knoetze and Willowmore.   Other collections numbered according to a section/species/collection system devised and in use at the Karoo Garden for the Haworthia include 3A/4/ I Zuurberg, 3A/4/2 no locality, 3A/5/1 18 miles NW Willowmore, 3A/5/4-5 Paardepoort, and 3A/6/8-1O Campherspoort.   The Karoo Garden collections are multiple plant collections aimed at including the more common variants, and these are all in cultivation, under uniform environment.  The collections 3A/6/8-10 are of particular note here as these were collected by the writer and photographs of these accompany this paper.  The collections were made along a single transect following the road southward from Klipplaat through the Groot River Heights at Campherspoort and turning west toward Willowmore.

The first photograph (fig.1) is of the stems of four plants collected about 2 miles north of the poort at the locality for H. zantneriana, growing on a sandy plain together with Astroloba foliolosa.  Here the plants were seldom more than 20 cm. in diameter or height.  The second photograph (fig.2) is of the upper sections of stems of five plants collected within the poort where they were growing en masse, with clumps several feet in diameter with long trailing stems.  Within the scraggly karoid scrub, some stems reach a length of 60 cm. and vary in width from 2-5 cm.  The third photograph (fig.3)  is of stems from plants collected about 3 miles west of the poort and on the north side of the Groot River.  Here the plants were slightly more robust than in the case of the other collections but the long straggling stems were not nearly as marked as in the second collection.   Colour, leaf tuberculation, plant growth characteristics, leaf-shape, -size and -presentation were all so variable that recognition of specific forms as varieties is impractical.  In summation one must conclude that the various elements collected and recorded here, belong to a single species complex.  There is no suggestion of geographic variability to suggest infra-specific grouping although it is admitted that for the area east of the Sundays River, evidence is sparse. This may also be true of the area north of Jansenville and also of that around Uitenhage.  The writer has seen plants referable to this discussion from this latter area, and from experience in other species complexes is tempted to suggest that H. armstrongii may be a synthetic resulting from introgression of the H. glauca/herrei complex into the H. brownlana/fasciata var variabilis complex of the Ultenhage area.

In conclusion it is suggested that H. glauca be retained as the species in the section Coarctatae found in the central and lateral drainage area of the Sundays River, possibly differentiated into two varieties H. glauca var. glauca in the Zuurberg mountains in the east, and H. glauca var. herrei in the Kleinwinterberg and Groot Heights in the west.

Further field work is required to substantiate such a proposal and also to elucidate relations of this complex with the Coarctatae of the Grahamstown and the Margaritiferae of the Port Elizabeth/Uitenhage areas.  A considerable amount of evidence has accumulated to support the approach to Haworthia taxonomy adopted here and it is hoped that this will lead to a more satisfying classification within the the genus.

Acknowledgement:  Acknowledgement is made to the National Botanic Gardens of South Africa where the writer is employed, and under whose aegis the work was therefore done.  Gratitude is also expressed to Mr. F. 3. Stayner, Curator of the Karoo Garden for unfailing assistance and encouragement.  Thanks must also be expressed to Mr. C. Walker of Whaley Bridge, Stockport, whose kind interest prompted this paper.

(Comments by the N.S.W. Haworthis Study Group:  This article, by Mr. M. B. Bayer, was received in October, 1970. The gratitude of the Group is extended to Mr. Bayer for his many letters and comments on Haworthias.) 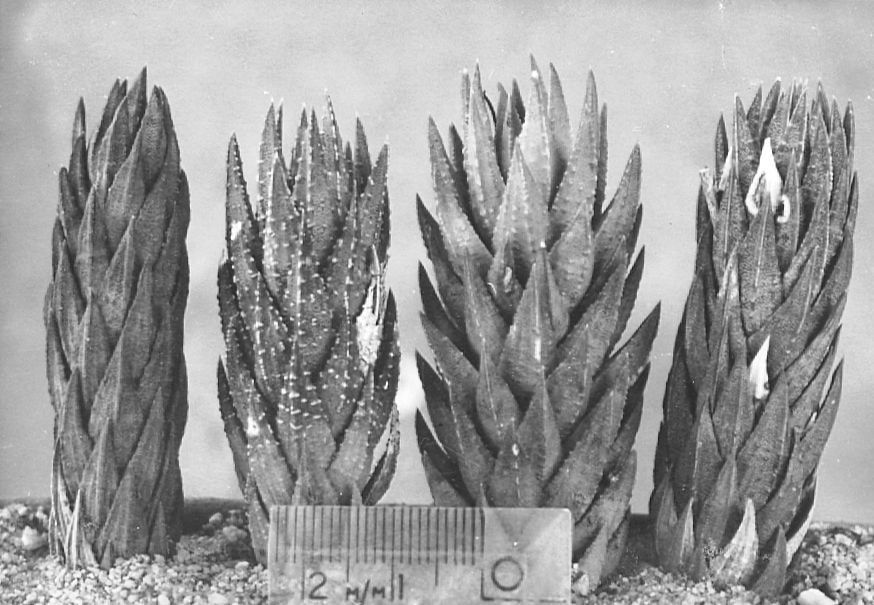 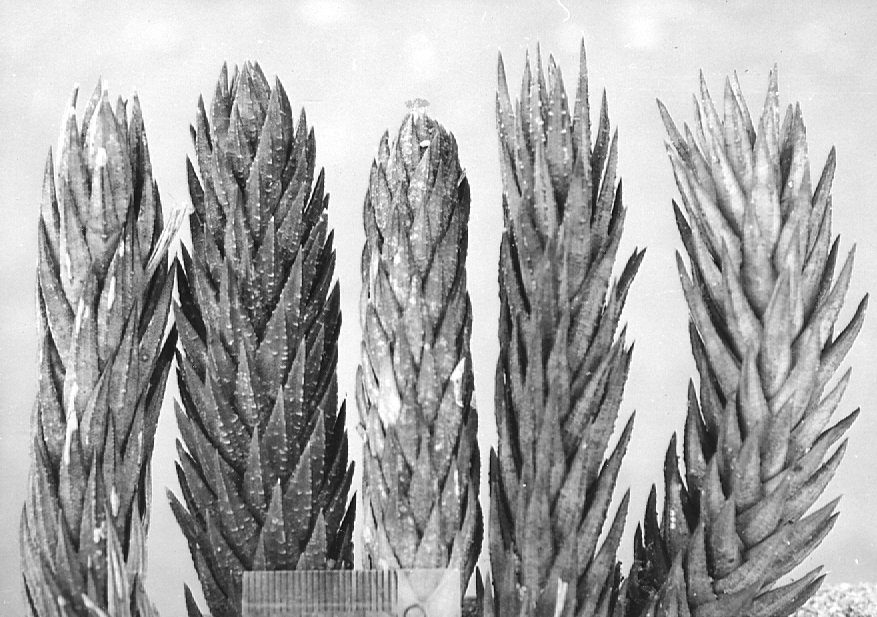 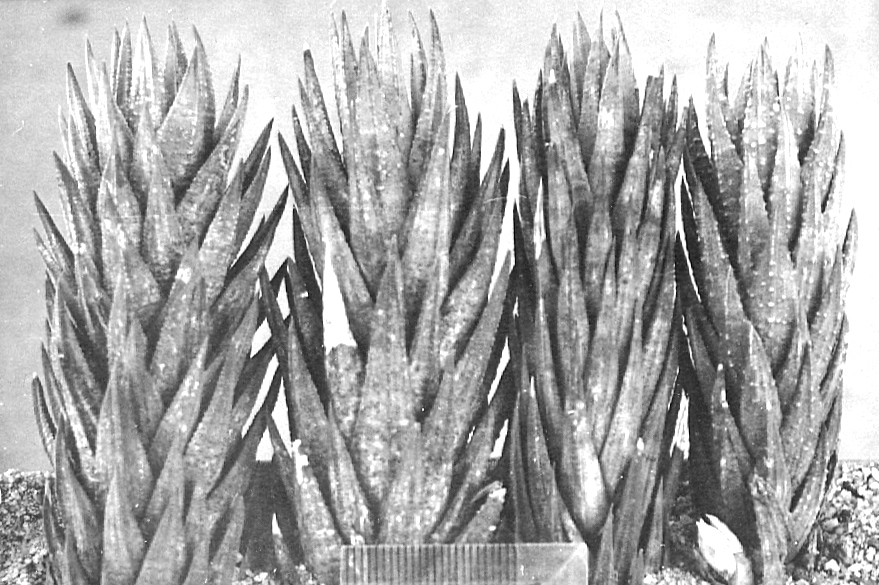