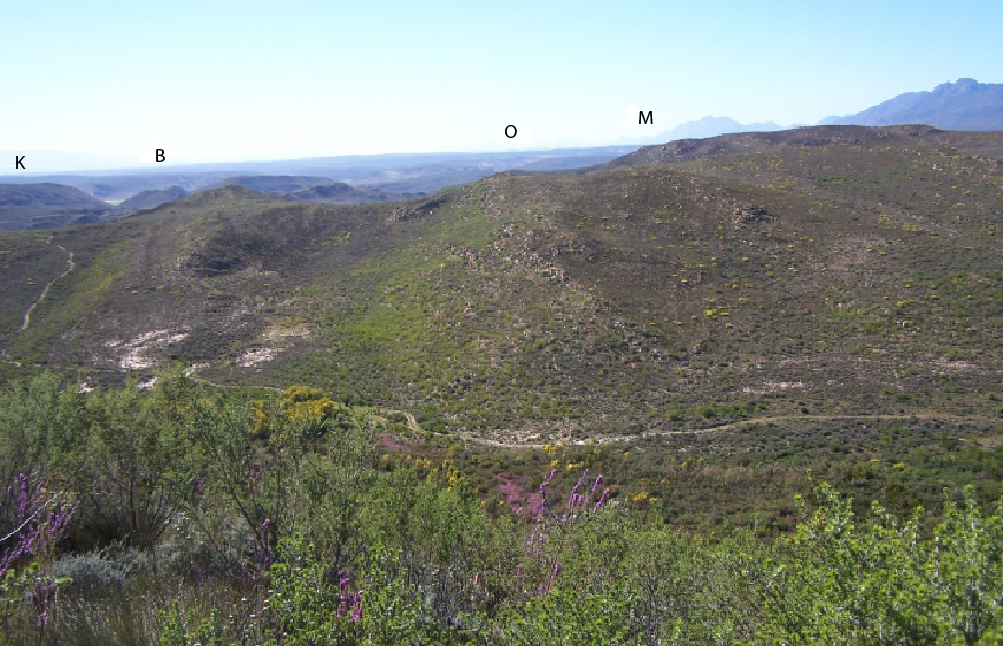 Where are we?  Geography plays such a critical role in my perception of the species that it is important to try to understand why and how it touches on the issue.  The Langeberg Mountains is a Table Mountain Sandstone about 10km wide and 1500m high running east-west and separating the inland Little Karoo from the Lowland Renosterveld of the southern Cape.  There are five main travel routes through those mountains of which two are via river gorges viz. Cogmanskloof, Tradouw, and then there is also the Gouritz River Gorge where there is no road.  Haworthia is not generally considered a sandstone and high mountain species because, firstly, there are few records to suggest that and, secondly, because they are averse to the higher moisture levels.  However, there are many records in the low and close foothills.  H. retusa ‘turgida’ is recorded in the higher areas and in the vegetation associated with the sandstone viz. the Fynbos.  Fig. 1 is a view taken looking eastwards from Kleindoorn (Kleindoornrivier). This is about 16km east of Barrydale that sits at the northern end of the Tradouw Pass.  The next farm is Brandrivier (B) and beyond that is Springfontein.  Muiskraal is marked with an “M” and this is at the northern end of Garcia Pass from Riversdale to Ladismith.  The “O” marks Oskop which is beyond Zandkraal and about 15km beyond Muiskraal.  Another 10km will take you past Waterval and bring you to Aasvoelvallei at the confluence of the Grootriver with the Gouritz..  The last stretch is another 10km over the Cloete’s Pass to Herbertsdale from where one travels back westward 7km to Towerlands.

What is there?  I speak of species complexes because the classification and naming of Haworthia seems to defy any agreement.  I do not think the nomenclatural system allows it either.  South of the Langeberg are the H. retusa and H. mirabilis complexes as well as H. minima and H. pumila, as main role players.  North of the mountains is H. arachnoidea and H. mucronata.  There are incursions and crossing of the mountains by three of these and my contention that they do not all do so is simply because we do not see beyond the narrow confines of our classification system. North of the mountain there is enough evidence to suggest that H. mucronata and H. arachnoidea is very probably the same one complex despite the few situations where they manifest in near proximity. South of the mountains H. retusa and H. mirabilis have an even more complex relationship.  It is difficult to begin to realize that there is a very small step between their manifestations south of the mountain to an integration of them both in H. emelyae that occurs north.  I have great sympathy for those who contest the issue.  I hope that the figures I present here, as a very small set of images from what may be a very small sample of existing populations, will help bridge the difficulty.

My field experience, however much field experience is a measure of any persons competence to process the product, suggests that there is a predictable coherence in the variation that one observes as one moves from discrete population to discrete population. This progressive variation is also driven by surface geology and habitat.  It becomes no problem at all but to realize that as another set of samples, the Aasvoelvallei H. emelyae (see MBB 7850 figs 2a-l) is nothing more than the Towerlands H. retusa ‘turgida’ (MBB7849 figs 3a-b) in another guise.  It is the habitats that are so vastly different.  Towerlands is south facing mountain slope in sandstone and Fynbos vegetation next to a perennial mountain stream.  It was no chance that the rain that caught us there stood in such sharp contrast to the warm sunshine that greeted us an hour later at Aasvoelvallei and H. emelyae a mere 10km away as the crow could fly.  That habitat is Bokkeveld shale with a heavy overlay of the very white quartz that veins this formation, and the vegetation is Karoid. 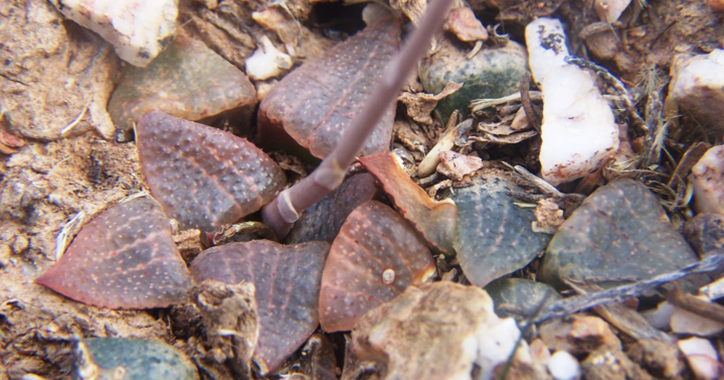 H. mirabilis ‘maraisii’  is present north of the mountains at Montagu and towards Montagu from there to Barrydale.  It is also present at Barrydale itself.  At Kleindoorn we have an enigma (yet another) where the plants (MBB7847 figs. 4a-s) are very similar to the Barrydale plants and they also seem to flower in summer.  But these same plants can be likened to H. emelyae ‘major’ at Muiskraal that flowers in the spring as does H. emelyae (and H. retusa).  Figs. 5a-c MBB7844 shows plants at Brandrivier. The dramatic thing is that these are recent photographs and very unlike the plants observed there by me 30 years ago and recognized as H. emelyae ‘multifolia’. 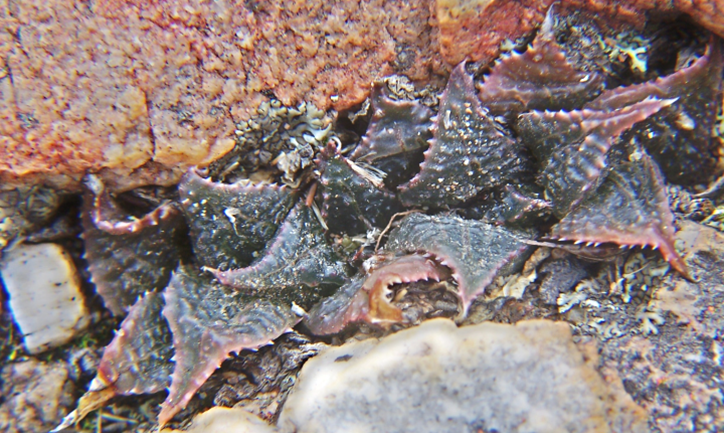 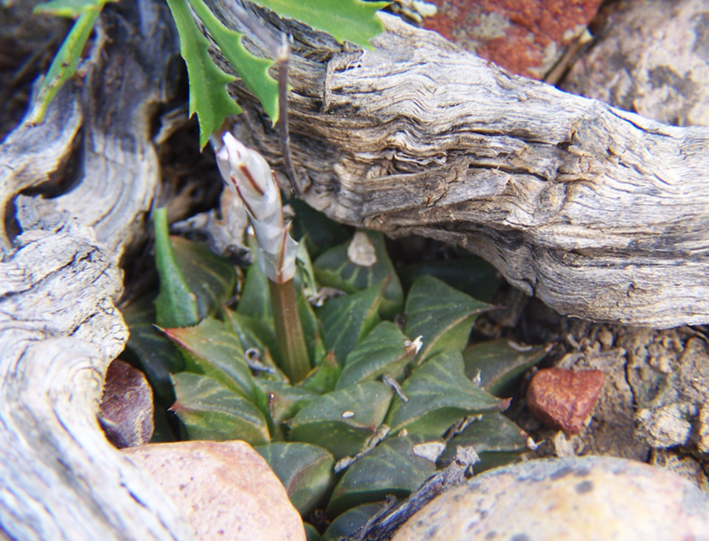 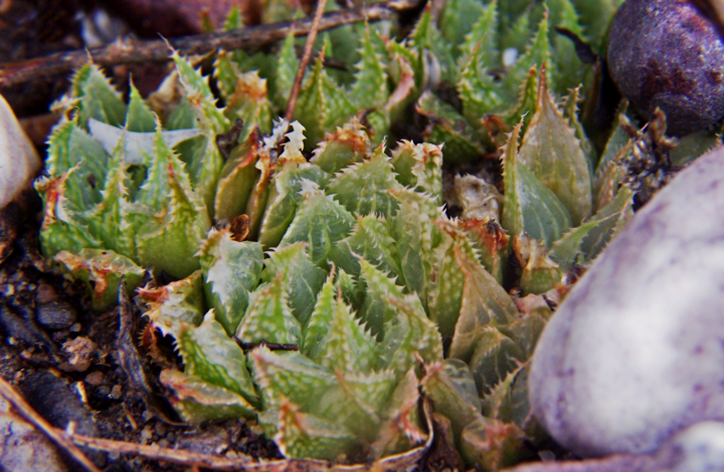 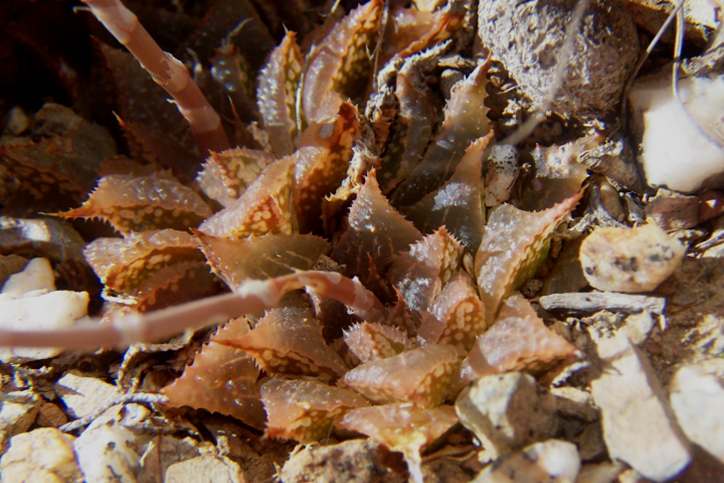 Figs 8 are of JDV97-44 (originally GDM429) plants from beyond Muiskraal (where both ‘multifolia’ and ‘major’ occur in disparate habitats) at Zandkraal, where there are three populations to which an appellation ‘H. breueri’ has been fabricated. I downsize that to H. emelyae ‘breueri’  to bring some perspective back to Haworthia nomenclature.  I do not include field photographs for Oskop and Waterval, but add two from south of Vanwyksdorp (see figs 9a-c ADH2966) where H. emelyae originated according to the collector (this was a Mrs. le Roux and the plants were sent to Smith via Mrs. Emely Ferguson).  The photographs were taken just south of Vanwyksdorp by Adam Harrower and I do hope that readers will realize from this article that it is not at all strange that the Von Poellnitz published illustration and type of H. emelyae (figs 10a-b)  are so often said to be of H. retusa ‘turgida’.  Curiously, H. Fourcade illustrated a plant (his no.144, see fig.11) of H. retusa ‘turgida’ and another (his no. 82, see fig.13) of H. reticulata as H. emelyae.  This says a lot for subsequent attempts to interpret and argue vehemently about Von Poellnitz’ H. correcta  (see fig.12). 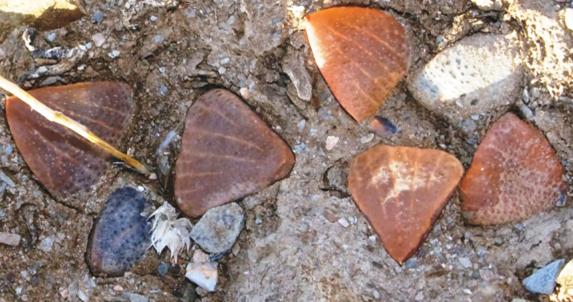 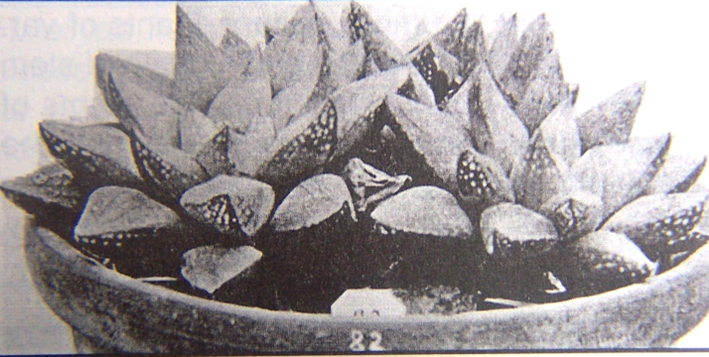 What really struck me on this recent excursion was just how much inviting territory is unexplored. In contrast to that is Kleindoorn where we photographed those plants actually found by Gerhard on a previous visit there with Bob Kent and Kobus Venter many years ago. The plants are on the south side of a sandstone ridge.  We could not find them elsewhere on our recent visit and it seems that suitable habitat is just not there for them.  There is a most remarkable divide of shale and sandstone on Kleindoorn and while there is/was a form of H. arachnoidea in the sandstone (repeated at Zandkraal), only H. arachnoidea ‘nigricans’ is in the shale. At Brandrivier, E. Springfontein and Muiskraal the ‘multifolia’  is in a sandstone pebble layer that overlays the shale in the manner of the Tertiary terraces south of the mountain. West of Springfontein the plants are again in shale, but without the white quartz of other karoid sites mentioned.

It is not possible to do this fieldwork without the goodwill of landowners that is threatened by a glut of collectors who often trespass.  Therefore I particularly want to thank Bertus le Roux of Kleindoorn, George and Jaco Nel of Brandrivier, Louis Botha of Springfontein, Anton Bredell of Aasvoelvallei, and Gregory Nicholson of Towerlands for access to their property. Gerhard Marx was contributory as was Kobus Venter on a previous excursion. Adam Harrower kindly sent me pictures from his records.