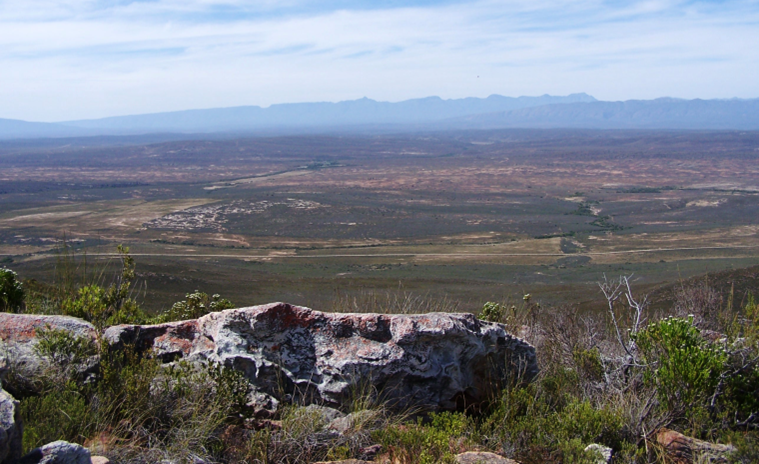 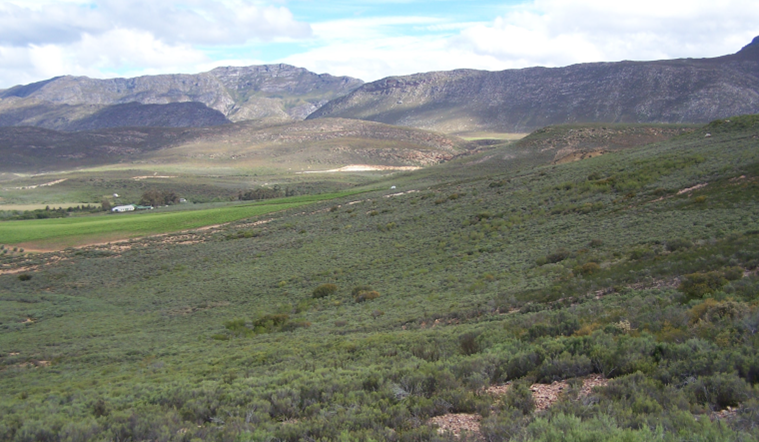 1b. View looking south west over Muiskraal to Garcia Pass

There used to be a regular bus service between Riversdale and Ladismith and J. Dekenah made use of this for his excursions into the Little Karoo to find plants for G.G. Smith.  He thus discovered H. emelyae ‘major’ at the northern mouth of Garcia Pass.  He also submitted a single specimen of a plant collected from the karoid veld a little further north.  It is that record that suggested to me that ‘major’  was linked to H. emelyae further east and north as well as to ‘multifolia’ to the west.  Etwin Aslander found what I regarded as the equivalent of ‘multifolia’  (see figs 2a-i) on a low plateau north of Garcia pass on the farm Muiskraal that is at the foot of the mountains north of Garcia Pass.

Johan Meyer of Barrydale once showed me a cultivated plant that he claimed he collected on the slopes to the north of Etwin’s locality.  This was a robust and rather tuberculate plant that was very reminiscent of the forms of H. emelyae at Zandkraal about 12km east.  In an earlier chapter I wrote more widely about the problem of land ownership and access and eventually felt that I should look into the situation at Garcia Pass in respect of conservation status of ‘major’, when an opportunity to break the impasse arose.

Fortunately I have quite a long association with Muiskaal and its owners, since I was at the Karoo garden and Mr. Henry Chamberlain, owner of Muiskraal, finally allowed me access.  We visited both Etwin Aslander’s population (MBB7858 see figs 2a-i) as well as locating a population on the northern slopes as indicated by Johan Meyer (MBB7859 see figs 3a-i). 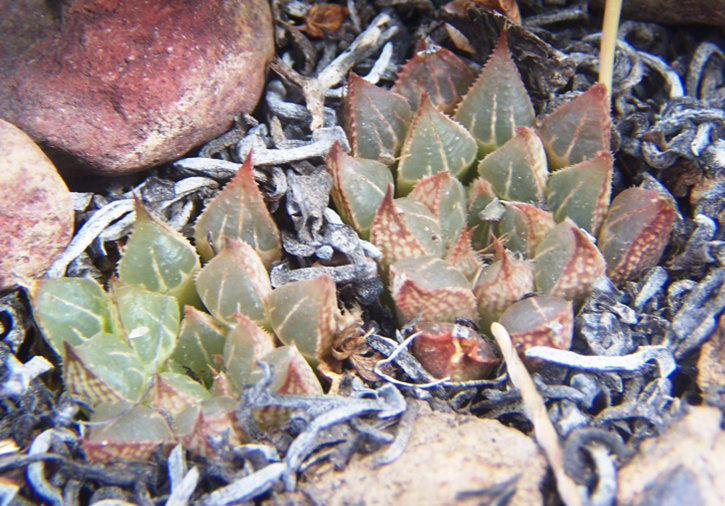 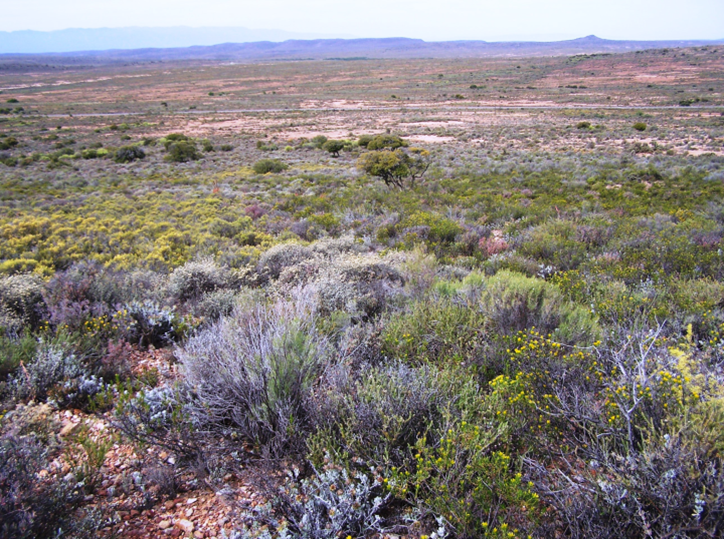 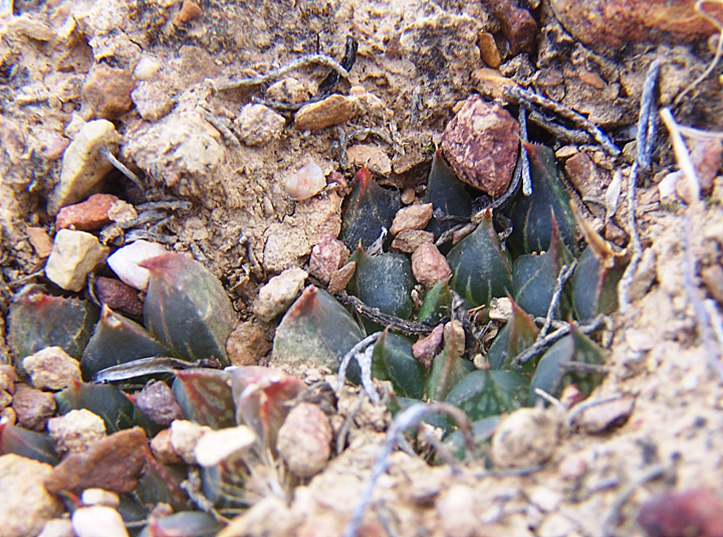 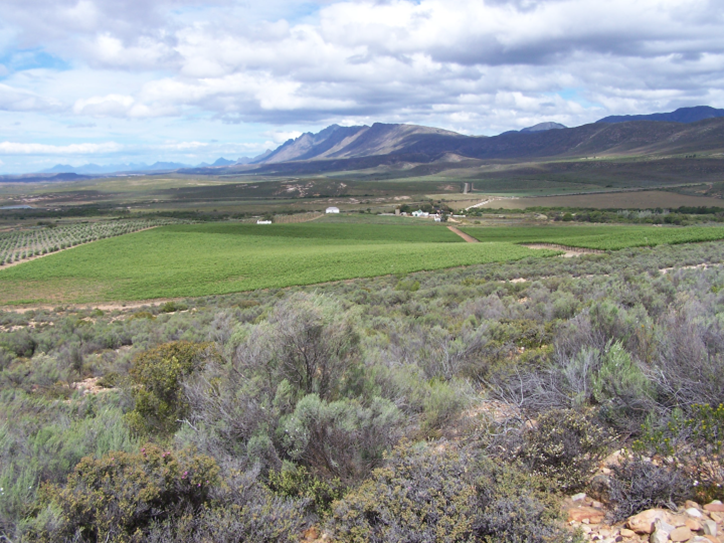 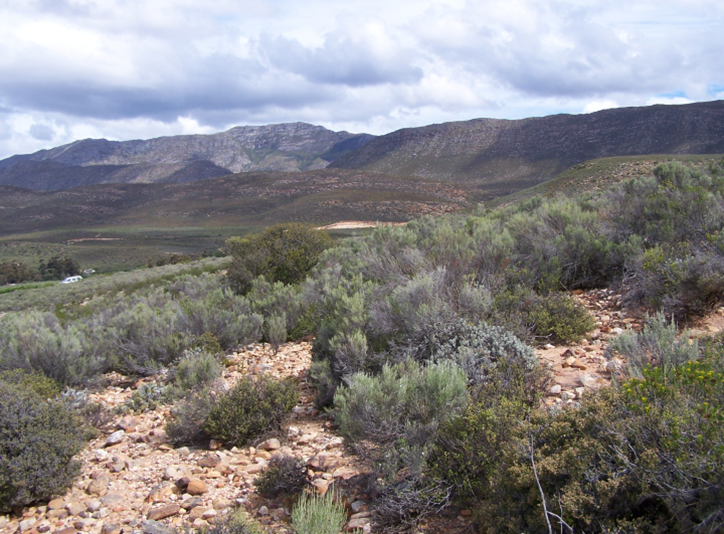 1e. Looking southwest to Garcia Pass from same spot as above

In addition we also found a population immediately west of the farmstead (MBB7857 see figs. 4a-f).   Particularly interesting is the dramatic switches in dominances of shrubby plant species that must be a factor of  differences in the very skeletal soils as well as how plants compete with one another (allelopathy).  The plants in all three populations are of course similar to the east of Springfontein plants in as much as one generates a mental common denominator for a set of variable plants.  This similarity must surely be seen in the similar geologies of the three sites which are on tertiary depositional terraces. We also explored extensively along the foot of the mountain between Muiskraal and Zandkraal without any success. 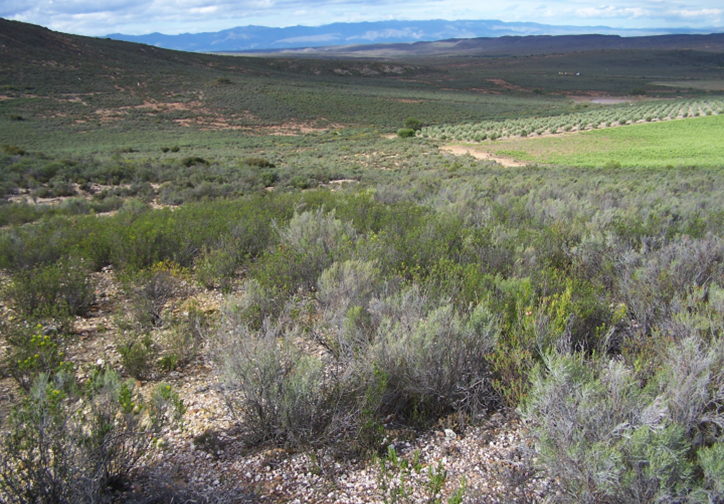 However, we also made contact with the owner of the upper areas around Garcia Pass itself and were able to explore both sides of the road at the ‘major’ locality (see MBB7861 see figs 5a-l) as well as the range eastwards. 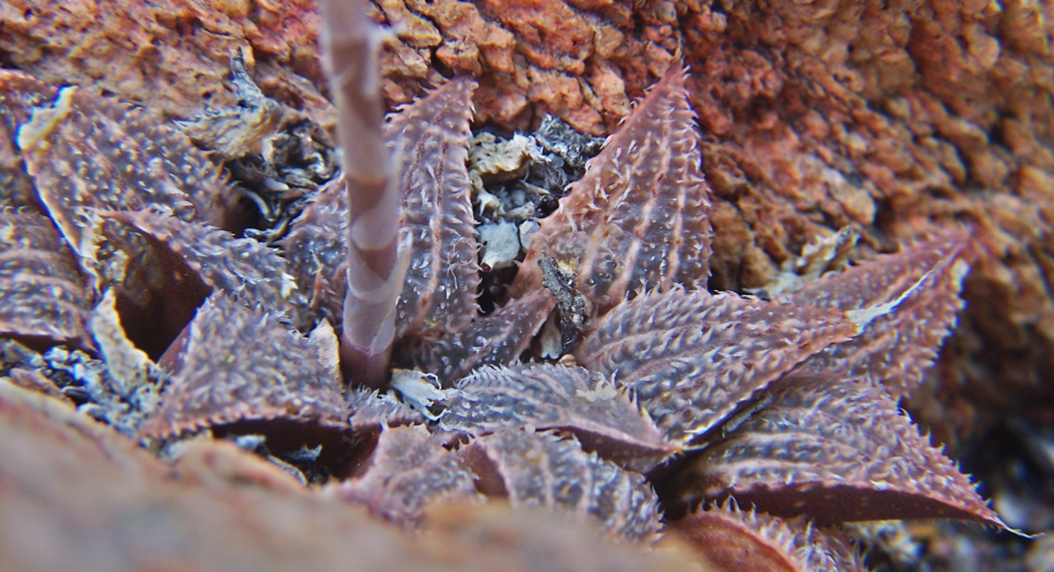 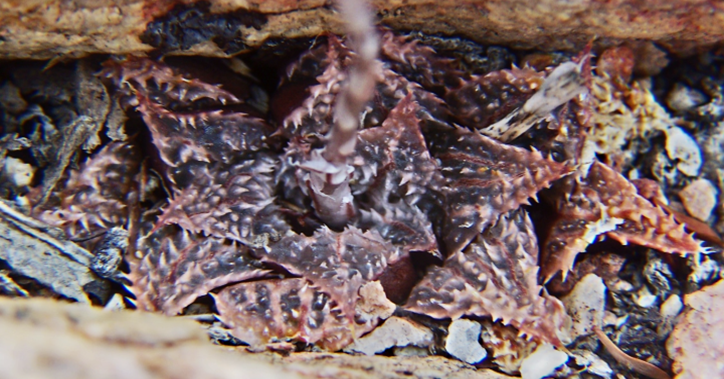 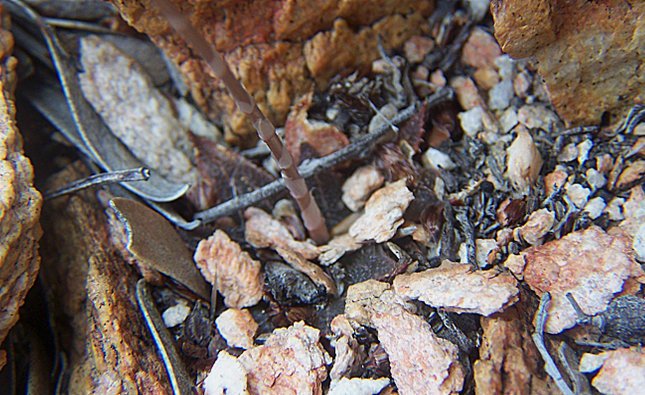 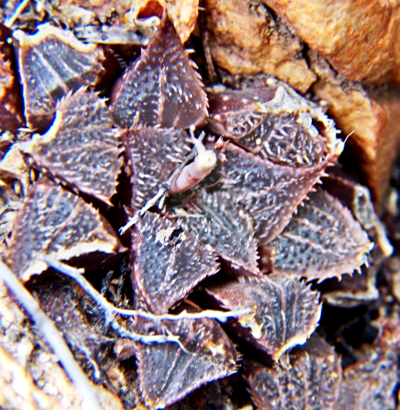 We did find a new population some 3km  east of the farm Onverwacht (see MBB7860 see figs. 6a-i) and Gerhard Marx reports seeing it immediately north of the same farm.  We did on a subsequent visit briefly get there, but did not find plants. Some of the plants were very ordinary and it is not surprising that J.R. Brown, in commenting on his collection, felt that he had two species viz. H. ‘major’ and H. maraisii as he might have named them.  Definitely the plants I saw could have been mistaken for individuals in several populations in the sandstones south of MacGregor or even nearer Villiersdorp (Moddergat).  Unfortunately my camera failed me and I did not get many pictures, but one can see that the plants can have relatively spineless leaf surfaces. 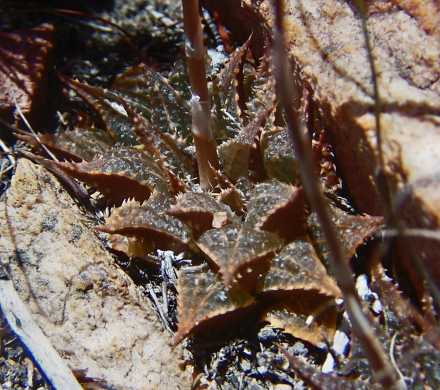 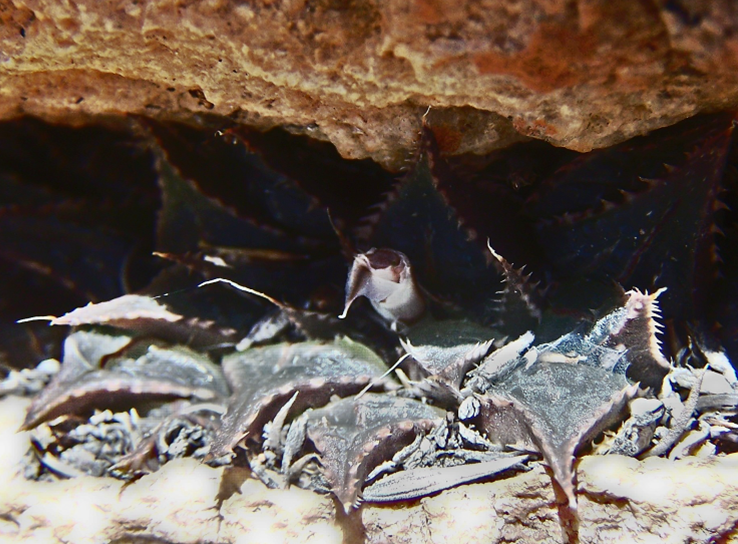 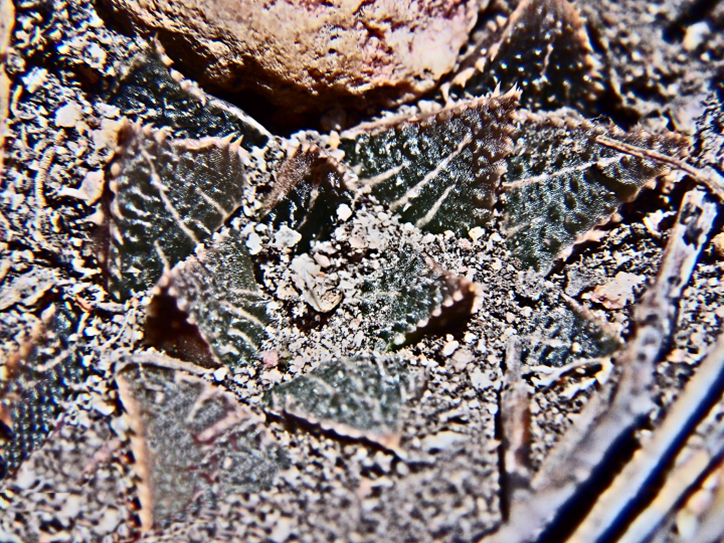 There is something curious about the flowering times.  The ‘major’ plants had evidence of recent flower stalks on a few plants while some plants were also beginning to flower.  The lower populations at Muiskraal and Zandkraal were already shedding seed.  I think it is significant to point out the geological features that I think are the main drivers of ‘difference’. Garcia Pass is a rift through the Langeberg Mountains that are uplifted sand stones. The northern foothills are an eroded remnant of tertiary deposits that overly Bokkeveld shale. The Zandkraal populations are associated with quartz outcrops or variants of such as are common throughout the Little Karoo. The vegetation differences between the sandstones, terrace gravels and shales are astounding and illustrated in the fact that botanists, following their original intention that a biome was a major association of plant species driven by massive and extensive landforms and climate, regard the Karoo vegetation and Fynbos vegetation as belonging to two different biomes.  The terrace vegetation is primarily Renosterveld, but it has elements of what is now regarded as the Thicket biome.  It would not be a serious overstatement of fact to say that no two plant species occur in each vegetation type.   The farmer on Onverwacht (Fynbos) is a flower farmer picking from the field, while the present farmer on Muiskraal (generally Karoo) grows olives and grapes.  Muiskraal used to be primarily a sheep farm and Onverwach barely.

Despite this observation on compositional differences of the vegetation, or because of it, my contention is that ‘major’ is a variant in the sandstones while ‘multifolia’ is an expression of the same species, H. emelyae, on the tertiary debris.  They both go on to varied forms in quartzitic patches in the shales. In my opinion H. emelyae is in a continuum that is formed out of the H. retusa and H. mirabilis complexes south of the Langeberg Mountains, where broadly speaking H. emelyae moves into sandstone as ‘major’ and the other two species occupy that terrain as ‘turgida’.

Sincere thanks to Mr Henry Chamberlain of Muiskraal and Mr Pierre Vermaak of Onverwacht.  Gerhard Marx also motivated with interest and information.