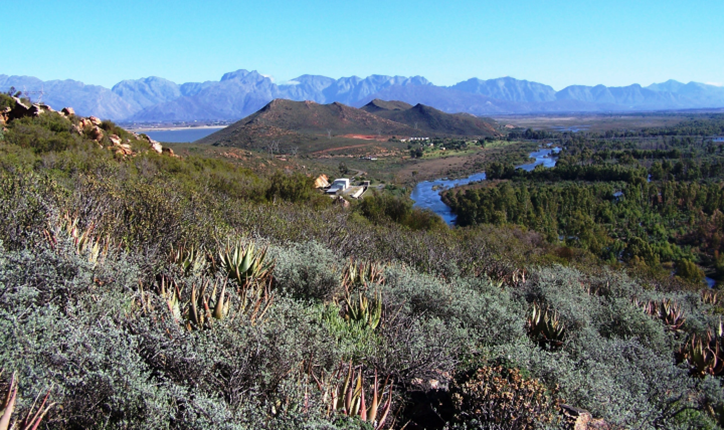 1. Looking down the north face Die Nekkies east to west

It is always assumed that botanists have a good grip of their subject, as one supposes for the scientists in other disciplines. Any science is the advance of knowledge by observation, hypothesis and testing by systematic enumeration and experiment. This is furthered by replication and review by other scientists.  Botany is far behind the exact sciences, because of the very nature and complexity of living things and systems, and also behind because zoology where animal life is obviously more organized than is the case with plants and where more attention is focused. 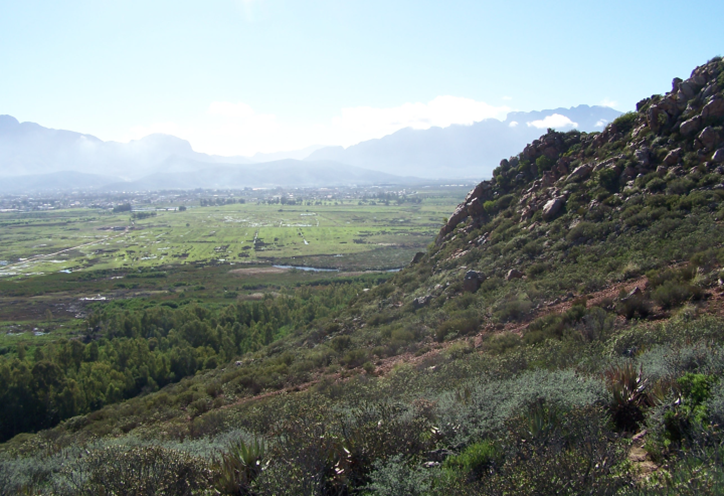 It has always been recognized that South Africa has a unique flora and traditionally the difference from other floras was attributable to the extraordinary richness, diversity and endemism of the so-called Fynbos that came to be regarded as the Cape Flora.  Just what the Cape Flora comprised was extraordinarily vague and the early limits were stated in terms of latitude and longitude.  In the mid-20century it was recognized that South Africa should be divided into biomes, as major components of the vegetation, and these were defined as units with wide and expansive boundaries. So while the Fynbos biome was recognized among others, no connection seemed to exist between its boundaries and those of the major geological systems.  The essential problem is that the boundaries of this biome are by no means wide and expansive, because one can literally step from Fynbos vegetation into Renosterveld, Sandveld and even Karoo.  This is no more dramatically demonstrated than at Die Nekkies where it is obvious that the vegetation differences are primarily a result of geological substrate fortuitously linked to rainfall gradients determined by continental land-form, latitude and topography. 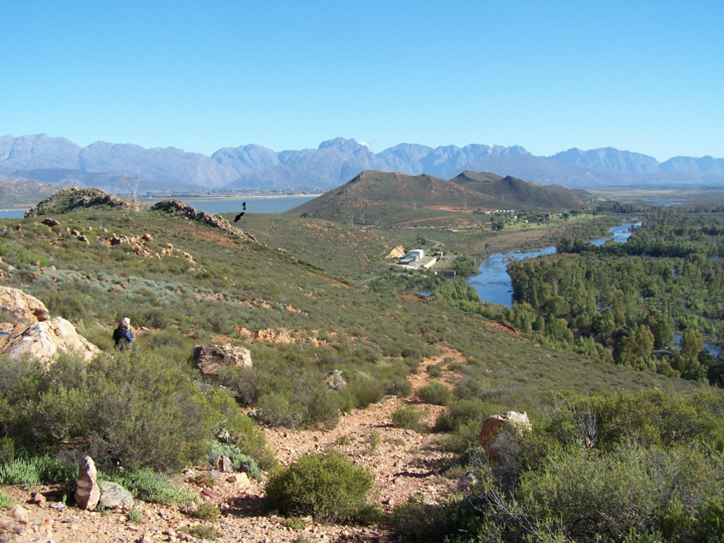 3. Same, but from further east 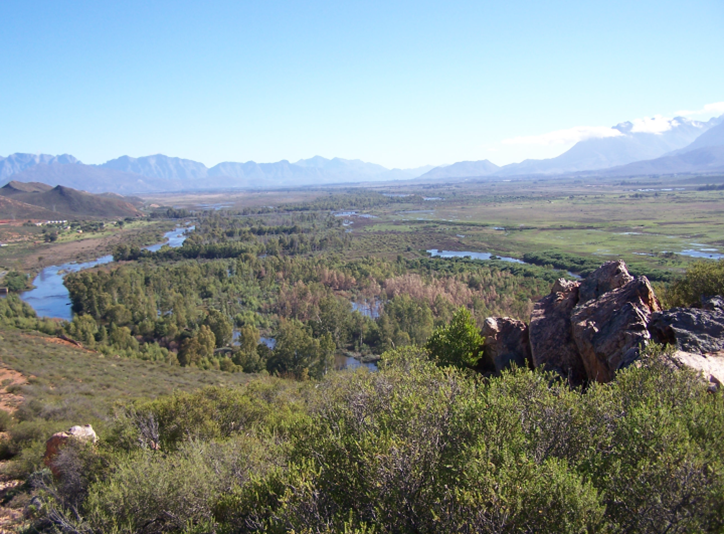 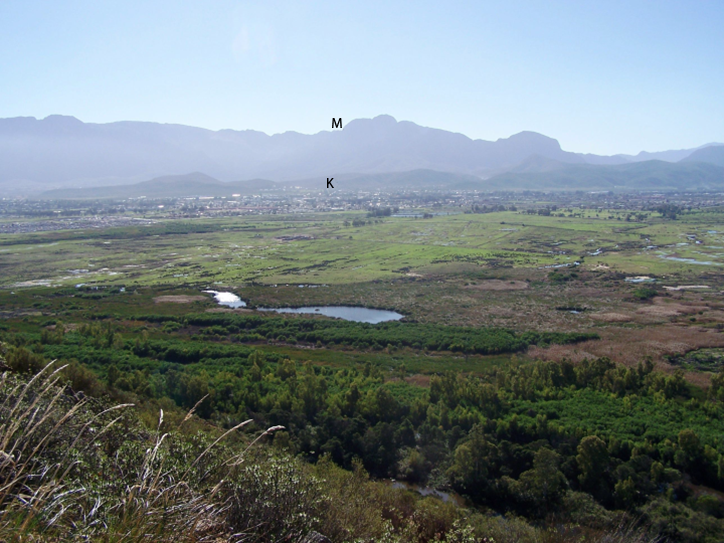 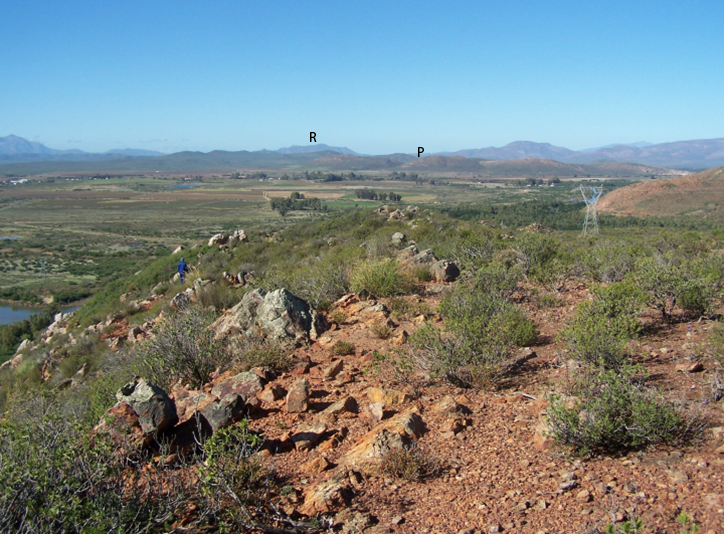 6. Near east end with P marking the site of Haworthia pubescens, R indicating Rooiberg to the east 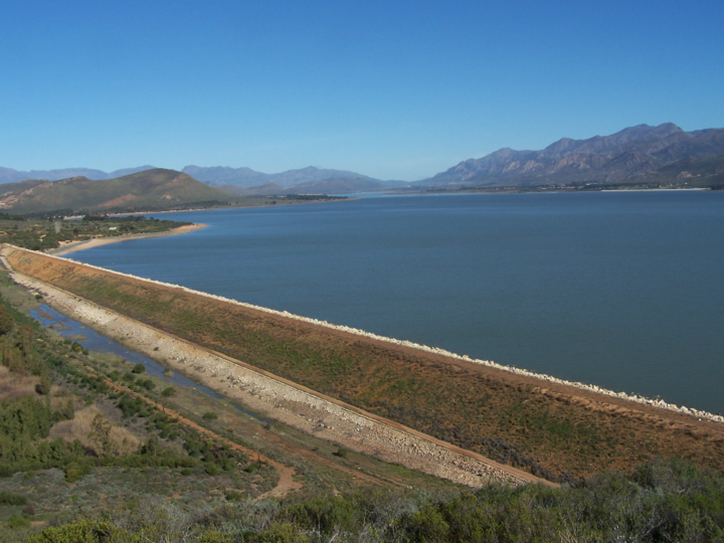 The significance of Die Nekkies is that it is formed from a narrow band of the Witteberg rock formation distorted in two transverse planes of the folded Cape Sandstone systems. Die Nekkies hills are directionally east to west and tilted down from the south.  Northwards they are lost under the flood plain of the Breede River.  Eastwards and southwards there is a wedge of Witteberg and Karoo formations that drives against the Cape Sandstones all the way south west to Villiersdorp.  The consequence is a dramatic vegetation barrier related to the very different soil chemistry of Witteberg quartzites as opposed to Cape Sandstone, which is as dramatic where Bokkeveld Shale and Dwyka Tillite meet.

What is in effect the case, and apparently not really conceded by botanists, is that there are primarily two floras in a single winter rainfall biome.  Some botanists insist that vegetation differences are simply fire driven.  Here it is again difficult to separate the consequences of different fuel loads due to the substrate characteristics and the plants adapted to each substrate from the effects purely due to the fire, but it is nevertheless quite obvious that the major differences are substrate.

This is all a very broad view of a complex phenomenon that emerges when one begins to look at the individual species components of the vegetation.  Vegetation classification is really based on dominant species and seldom has any attempt been made to understand species distributions that do not coincide with broad general pattern. When this has been attempt-ed it has been very seriously flawed by the problem of identification. This is a matter that botanists seriously underestimate and consistently fail to address.

It is simply assumed by general botanists that taxonomists in herbaria are competent and able, and that revisionary work and primary taxonomy have kept pace with technological progress and research in all other fields.  This is not the case.  Taxonomy has for many years been a forgotten science and less and less resources are allocated to either revisionary research or identification.  It is simply not possible to collect, mount, store and record the variation of even a fragment of the species flora within any herbarium structure. A related fact is that there is no definition of what a species actually is. Very often it is just assumed that a definition is in place that is satisfied when some, usually morphological, criterion suggests that a specimen and sometimes more than one specimen does not agree with some ill-defined norm dependent on the taxonomist and the herbarium in which he/she is stationed.

It is self-evident that in the nature of evolutionary processes that are presumed to take place, that variation must be intrinsic to any species. This means that species need to be considered as systems that respond and change according to events that also change substrate and climate.  It also means that species systems cannot be the same and a model (definition) needs to be in place that recognizes that each species (system) may be in an individual relation to time and space.

Two examples from Haworthia can be given for the significance of Die Nekkies in terms of species diversity and distribution and the difficulties that poor taxonomy introduces to obscure pattern.  The first is for Haworthia maculata. Where there is already considerable doubt as to a proper classification of the Alooideae in the Asphodelaceae, Haworthia is persistently seen to be a single natural group.  While there is no definition in place for the species category, the genus category is assumed to have some reality.  It in fact does not.  It is quite evident that some species do have very close affinities that would satisfy the perception that these form good genera, there are many species that elude such simple categorization. In Haworthia, as it is traditionally constituted, there are three distinct sets of species based on a range of characters both vegetative and floral.  It is an extraordinary reflection on botanical classification that this has never been properly accepted.  The genus Aloe is widely distributed in South Africa and more than 150 species are recognized.  However, only two species can be seen as strictly Cape Sandstone and hence Fynbos “biome” species, although several are closely associated.  There is only one species of Haworthia subgenus Haworthia that can truly be said to be a Fynbos species and that is H. nortieri.  This subgenus is poorly represented north and west of the Fynbos “biome”, but it is represented by a vast array of variants in the Eastern, Southern Cape and Little Karoo that are difficult to aggregate into species.  The variants seem to be ecotypes and it is such ecotypes that do adapt to sandstone habitats.  There are none such variants in the sandstone mountains south and west of Die Nekkies where only one “species” viz. H. maculata occurs in localized population at several points along the range.   This “species’ is very closely related to H. herbacea that is very common on all the other skeletal soils to the east, both north and south, but very rarely penetrating sandstone habitats.  Where H. maculata occurs on the eastern limits of Die Nekkies, there is a subtle change of rock and shallow soil to a more Karoid habitat, and the plants tend to be more clump forming and spinose, suggesting a shift to H. herbacea.  This similarity shift is replicated in H. herbacea where it occurs east of the brickworks near the Brandvlei Dam wall. Ecotypes similar to, and classified as, H. maculata occur on the Witteberg formation hills southwards to Villiersdorp, but never in close association with H. herbacea.   Curiously, a very similar variant to H. maculata occurs again high in the sandstones north of Worcester on the Audensberg peaks and also lower down in the Sandhill area.  Thus H. maculata is a significant marker in the relation of the Asphodelaceae and Haworthia to the distinction of “Succulent biome” and “Fynbos” biome. 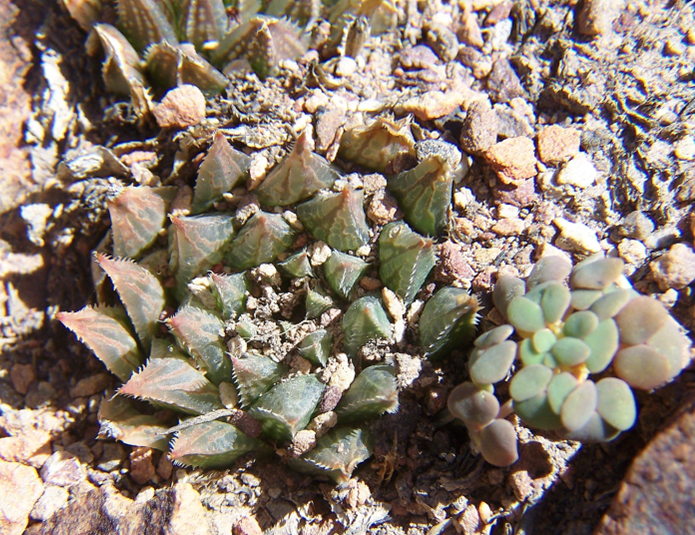 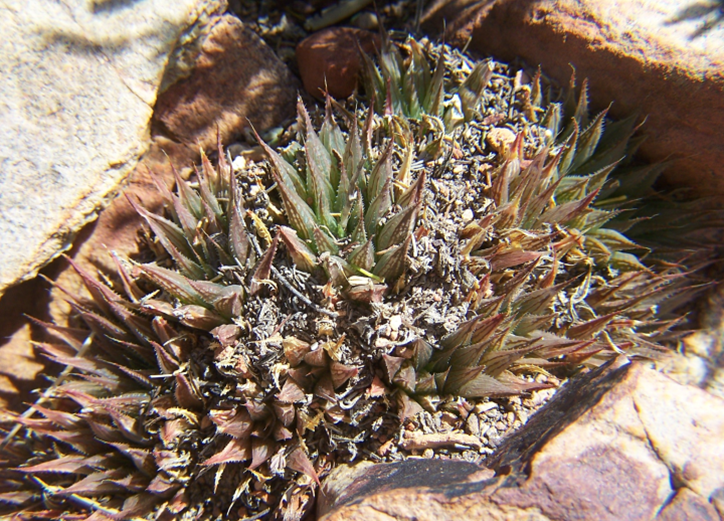 Haworthia subgenus Hexangulares is represented by only one species in the south western Cape.  This is Haworthia venosa that occurs only in rock faces flanking the lower Breede River and Gouritz River.  Its related species H. tessellata is a Karoid element.  Haworthia subgenus Robustipedunculares is tightly allied to a winter rainfall “biome”, but consists of only four species. Three of them are endemic to the Southern Cape and three of these do not extend further west than Ashton and Bonnievale.  H. pumila is abundant in the Worcester/Robertson Karoo and extends as far afield as Laingsburg, Anysberg and Barrydale, but south of the Langeberg it is not nearer to Swellendam than at Drew Station.  South of the Riviersonderend it is only at Stormsvlei, near Protem and at Vaandrigsdrift.  It does not occur on the Witteberg formations south of Die Nekkies, but it does occur on the eastern lower slopes of Die Nekkies itself.  So here again Die Nekkies is the evident limit of this species too – the second example.

Possibly the very dramatic case of Drosanthemum halli and D. bellum more clearly suggests the significance of local diversifying factors.  D. halli is yellow flowered and abundant whereas D. bellum is pink and localized.  They do not co-occur.  It can be dramatically shown that D. hallii is nothing but a geographic variant of the bi-coloured D. micans that occurs north and west of Worcester, and that D. bellum can only be different because of very site specific factors.

H. maculata at the western end of Die Nekkies appears to be a solitary plant but, as it occurs more eastwards, it becomes proliferously clumping as the vegetation also becomes increasingly Karoid.  Why this should be so is not clear.

The many accompanying illustrations (MBB7526 figs. 8-38) show the scenery and topography and the range of variation in H. maculata.  One can see that it is at home in both the Restiods of the Fynbos and under Pteronia paniculata of the Karoid. 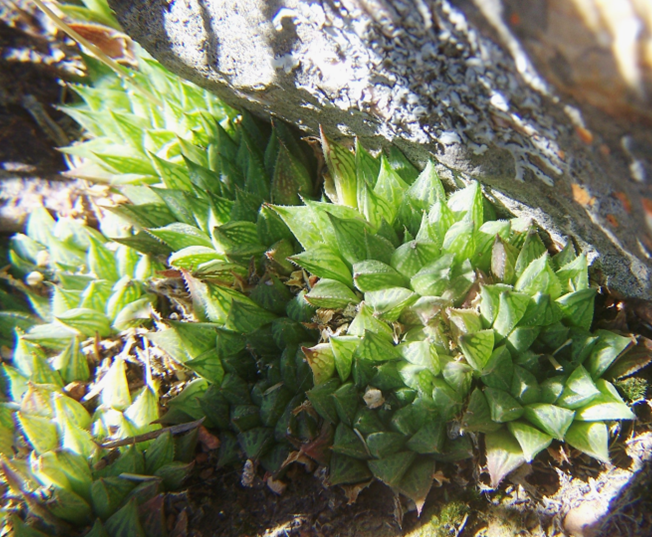 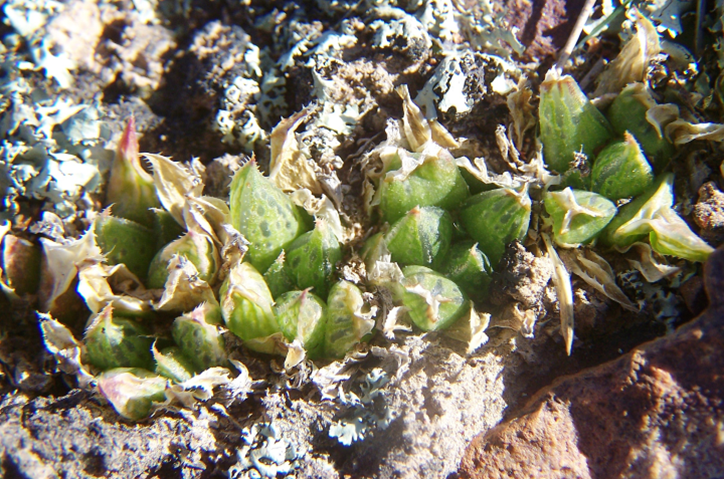 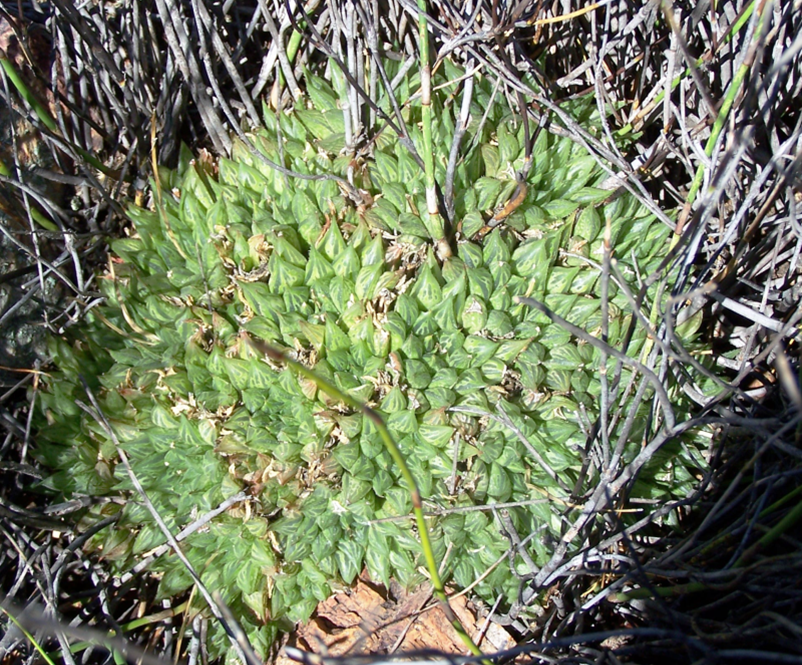 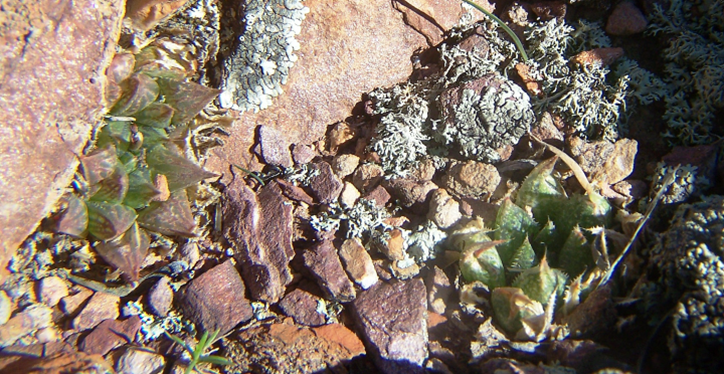 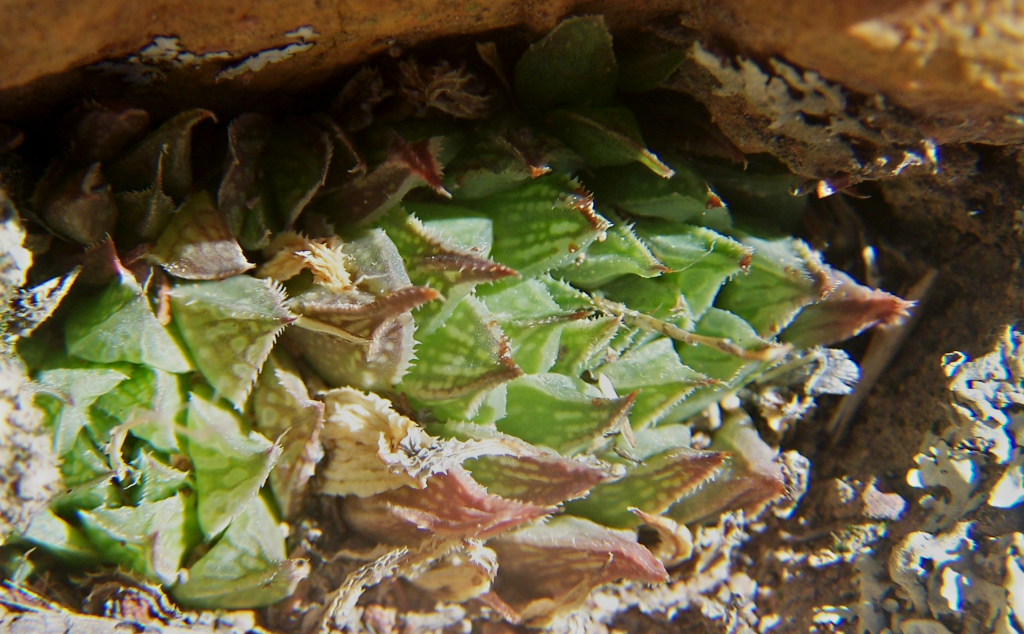 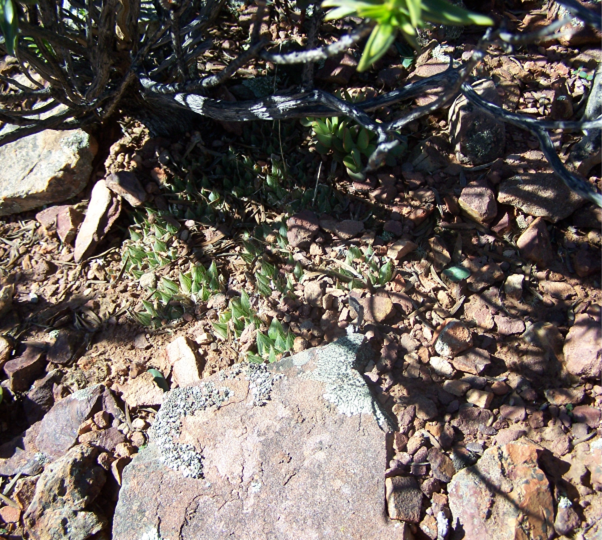 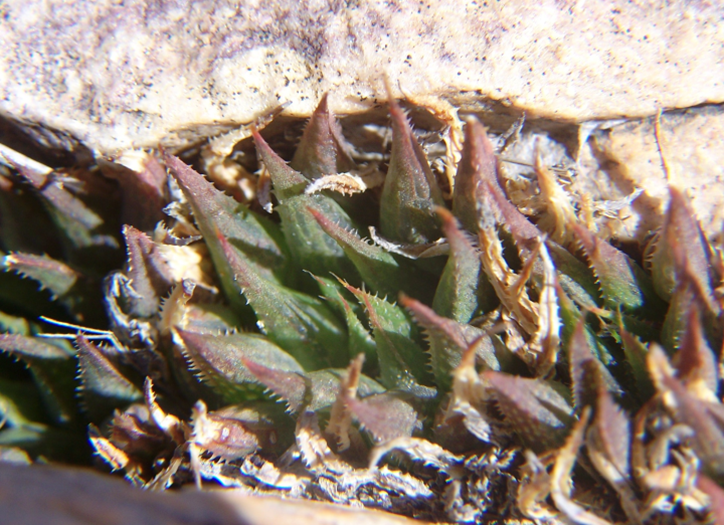 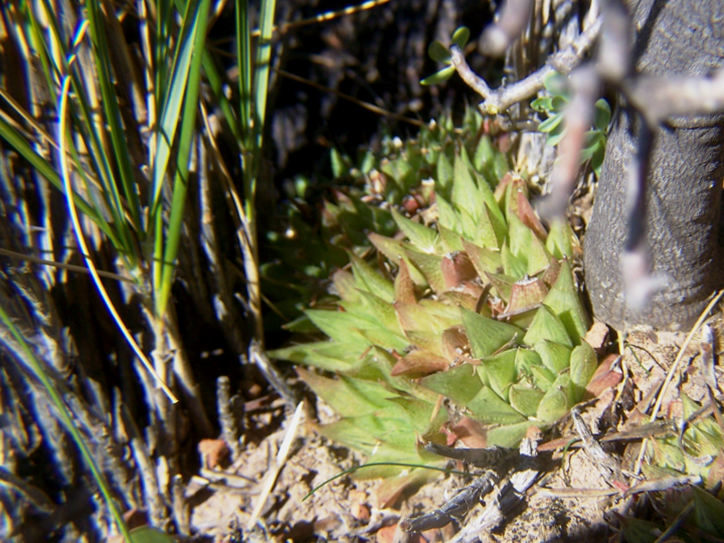 I would like to thank Anso Le Roux of Pokkraal, Rawsonville for drawing my attention to H. maculata much further west along Die Nekkies than previously recorded and for inspiring a walk along the full eastern limb.