It is very difficult to write about particular plants when one has to contend with the fact that one is not sure what Latin names may mean to the reader.  I wrote a piece with closure in mind and thought I would send it to a non-taxonomist botanist whom I think is a tribute to the profession.  Extracts from his response are “I am an ardent supporter of your species concept and couldn’t agree more strongly with your statement that without variation, there would be no evolution…I do agree that the pervasive species concepts force us to ignore the most interesting and productive research avenue: documenting and understanding variation in the field.”

It is worth considering what he has said about “pervasive species concepts” and just what he might mean when he says they force us to ignore documentation and understanding of variation in the field.  It seems to me that the converse is the truth.  Failure to properly understand and document variation has contributed to the pervasiveness of false concepts which fly in the face of science.  I keep harping away at this question of lack of definition, because it is not apparent to me that any reader appreciates my point of view.  To my mind a key issue is made of nomenclature and the rules that govern it, and very little attention at all is given to whether these Latin names help our understanding at all. I feel that my contribution contributes mostly to documentation of variation and that I cannot do much in respect of understanding.  This short article should explain why.

I have tried to explain what I have observed in the three species Haworthia cooperi, H. cymbiformis and H. transiens as I understand the various populations that might be seen to constitute three discrete systems.  My problem is that they do not necessarily constitute such discrete systems at all.  Even considered together as one system, it is not entirely sure in my mind that they are truly separated from any other species belonging in the same sub-genus Haworthia.  It is not improbable that they diffuse into H. decipiens and into H. mucronata that are in turn diffused into other elements.  If one considers that a species definition based on breeding true has been “…used by most taxonomists since 1682.”  (I quote this from a prominent taxonomist), one must recognize that taxonomists have then been ignoring the innate variability which drives change, adaptation and evolution.   I am not sure that I have not been making the same mistake although I have consciously tried to recognize that discontinuities of any kind do not necessarily suggest discrete species.

Someone once wrote that “specialization leads to extinction”.  If species become too specialized, they lose the capacity to adapt and evolve according to an ever-changing environment.  At the other extreme, species that can maximize variation within their individuals and populations will benefit most in those changing circumstances.  If taxonomy has been guilty of paying insufficient attention to variation as a concomitant of evolution in present time, it may mean that we may generally be recognizing species at the wrong level.  We may collectively be attaching far too much attention to morphological and even genetic differences without due account of distribution and potential for change both internal to the species and external from the environment.

Therefore, I am deeply skeptical that my classification of Haworthia is a true reflection of the situation in respect of actual species.  I have been influenced by a paradigm in taxonomy that genera and higher taxa were largely artificial and determined by arbitrary choices that they should be approximately equal in size and number. Without taking this too seriously, there is a huge problem when it comes down to species and to consider that some in a genus may be tightly grouped in terms of limited variation and distribution, while others form vast complexes.

Jan Vlok kindly sent me a picture of a Haworthia from the Little Langkloof.  This is the upper reaches of the Keurboomriver Valley which runs inland from Plettenberg Bay, turning west north of the Knysna area and cutting across the Prince Alfred’s Pass road between Knysna and Uniondale.  The only Haworthia species in the area are H. transiens and H. scabra and they are abundant there.  Jan said the plant was in Karoid vegetation and was generally solitary. I suggested that it was probably an ecotype of H. transiens and that otherwise it may have been H. cooperi var. gordoniana.  I have written an account of the interaction of those elements in the Baviaanskloof to the north and west, and it is quite evident to me that there is a close relationship.  It should be noted that there is also a major variant of H. scabra closer to the Prince Alfred’s Pass road, so that there is a precedent in adaptive change.  I was recently able to visit the area myself and confirm that the plants are in this very same category of interaction between H. cooperi and H. transiens.  Thus, in my opinion, they parallel the kind of relationship other variants of H. cooperi has with H. cymbiformis, and in a changed dispensation for taxonomy it may be agreed to regard these two species and H. transiens as one species.  It is possible that continuity may still be found with H. mucronata further west.  While I write “changed dispensation”, I regard it as essential that it first be understood that there is still a vast amount of exploration and recording to do and that any final solution will only be achieved by collaborative effort and agreement. Professional taxonomists will have to make the decisions, but they will have to first prove themselves competent to do so.

The above was the article as printed in Haworthiad.   It deals with my collection MBB7586 (see figs. 1a-e) from east of Die Vlug in the Prince Alfred’s Pass south of Uniondale.  My conclusion was that H. transiens was but another expression of H. cooper at the western end of its distribution zone and possibly transition to H. mucronata.

I had collected seed that I asked Etwin Aslander to grow, which he did very successfully.  The seedlings were initially extraordinarily variable and there were some striking plants that gave indications of reticulate marking that would have shamed H. cooperi ‘picturata’.  After Etwin transplanted them the plants looked much more ordinary and I selected a few to grow myself.  So this short note is just to present pictures of these and demonstrate the badly beaten horse of variability.

Figs. 1 are a series of pictures of plants in the field that can be said to be representative without leaving out too much.  Figs. 2a  and b are of my permit limited collection grown in my outside rockery in relatively full sun.  Figs 2c. to 2h are the selected clones that I grew on to show readers what happens between field, nursery and greenhouse table. Any wonder that you can justifiably complain when you do not get what you think you ordered?

I originally omitted names and would now use the name H. cooperi ‘transiens’.

Jan Vlok very kindly informed me of the existence of this locality east of Die Vlug. 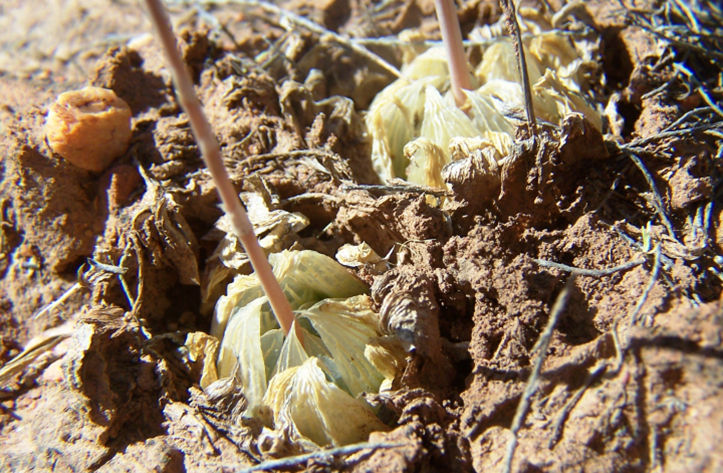 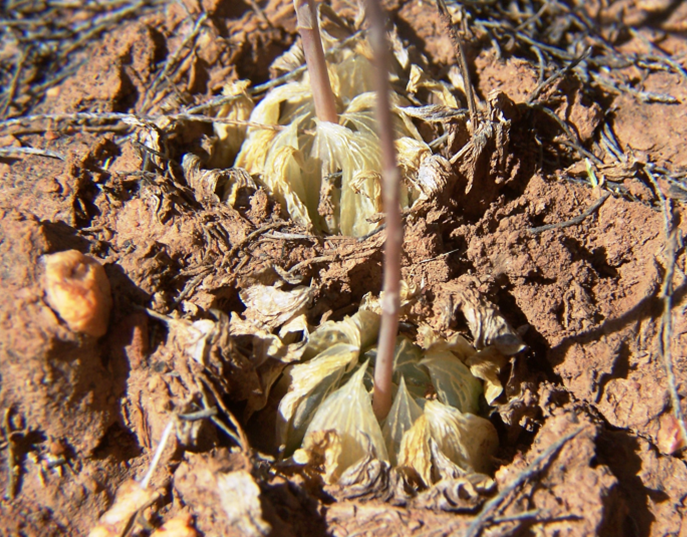 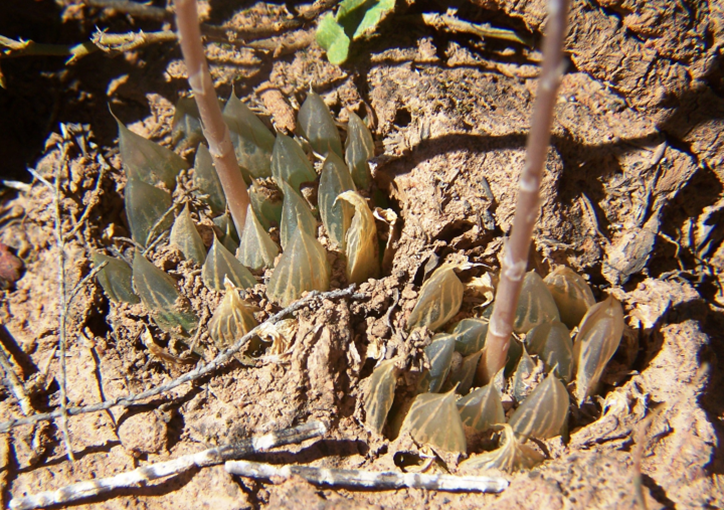 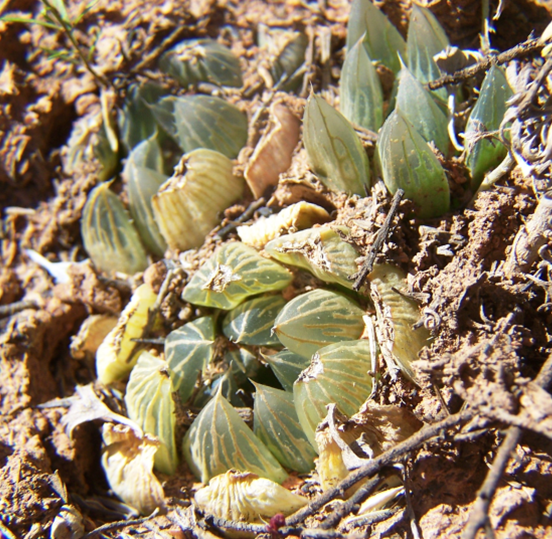 Figures 2a and b are of my permit limited collection MBB 7586 of Haworthia cooperi ‘transiens’. Kliprivier grown in my outside rockery in relatively full sun.

Figs. 2c to 2h. Selected clones of plants grown from habitat seed in cultivation, grown on to show readers what happens between field, nursery and greenhouse table.