How did this start?  Is it possible to see anything with such a quick peek?

Somewhere in my memory bank is my stated opinion that understanding H. arachnoidea would assist any botanist towards a better understanding of classification. This was long before I came to see that this is a lot more necessary than I thought then. It is not just botanists who seem dumbed down to the reality of a diversity that is necessary for response to change and largely denied by the nomenclatural code and how it is practiced.  We have not understood change or what changes can occur.  During perhaps only the last 15 to 20 years has it become apparent that changes are cataclysmic and frequent.  I will skip the fact that the violence of catastrophe, or the drivers of catastrophe, may also induce change at even a cellular level.

I usually go into the field with a specific goal while also carrying a host of peripheral questions in my mind.  While exploring the problem of H. schoemanii, I was thus also thinking of Conophytum.  After photographing a species seen at Laingsburg, I mentioned to Steven Hammer that I had also seen it in the southeastern Tanqua Karoo (Bakoven).  This was news to him and so in my wish to re-establish the reality of H. venosa subsp. granulata recorded at Patasriver (actually Patatsriver road and that is another story that will be told) as well as the Conophytum for Steven, I undertook an expedition to the Tanqua.

It was co-incidence and luck that brought us into contact with Dr De Ville Wickens, who is an expert on the geology of the Gondwanaland connection to the Tanqua mountains and who now owns Bizaansgat to the northwest of the farms Droogekloof and Bakoven.  Dr. Wickens facilitated our expedition by offering us accommodation at Bizaansgat and we were thus able to spend more time there than otherwise.

Derek Tribble did alert me to a small Haworthia in the Skitterykloof about 20km to the west of Bizaansgat.  I had myself seen the plant and concluded that it was H. arachnoidea.  Fairly recently Adam Harrower gave me a small plant from the vicinity of Skitterykloof and I confess that I was a bit confounded because it did implicate H. nortieri (See ADH3140, figs 1 & 2) particularly because the leaves were so spotted.  Why I say this is because the combined presences of the look-alikes H. arachnoidea and H. nortieri ‘Albispina’ at Koup and elsewhere, as well as their often superficial resemblances, now make me a little wary of snap decisions. I later concluded from the flower that Adam’s plant was in fact H. arachnoidea, and not because I am convinced I could separate the two on the basis of the flower only.  So this report covertly deals with the reality of a massive variation within H. nortieri and also H. arachnoidea and hope that readers will generate their own open-mindedness to realize that I am drawing conclusions here that could or should be better substantiated.  I also hope that this does not mean that a whole new set of Latin names is required to try and do so.

Because my initial field work was to obtain an overview of the genus, I soon stopped paying much attention to H. arachnoidea, because it seemed to be so ubiquitous. A big mistake! Unfortunately digital cameras were then not available and space in the herbarium (contrary to what my learned friend has to say) was and still is at a premium.  The consequence is that I do not have a proper physical or mental record of all the plants and populations that I might have seen.  In fact I cannot even fully remember how or why I linked H. arachnoidea to H. decipiens the way I did in my Handbook.

What happened on this expedition is that at Droogekloof we were surprised to find a very small Haworthia that I take to be H. arachnoidea (see MBB7644a, figs 3a–j). It is important to note the differences in colour, spination and leaf-spotting and/or reticulation.  These plants were single and scattered over a fairly wide area.  They varied in size from as little as 20mm to an average of about 30mm diam and become extremely cryptic in the dry summer. 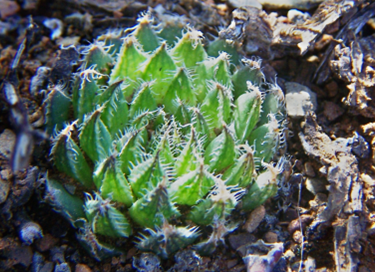 We continued to Bakoven and found it again (see MBB7644, figs 4a-e).  Fig. 4c. is a view from a mountain top at Bakoven looking NNW towards Droogekloof and then Bizaansgat in the distance.  Fig. 4b illustrates the weak inflourescence with few flowers generally true for many of the populations we observed.  We the retraced our steps and saw similar plants approximately midway back to the Droogekloof population (MBBsn see fig. 5).  The next day at Bizaansgat we saw exactly the same thing at our first three stops and then came across an absolute field of them at a fourth.  Again at several more stops on Bizaansgat (MBB7646 see figs 6a-h) and yet again on another farm 5km to the east. 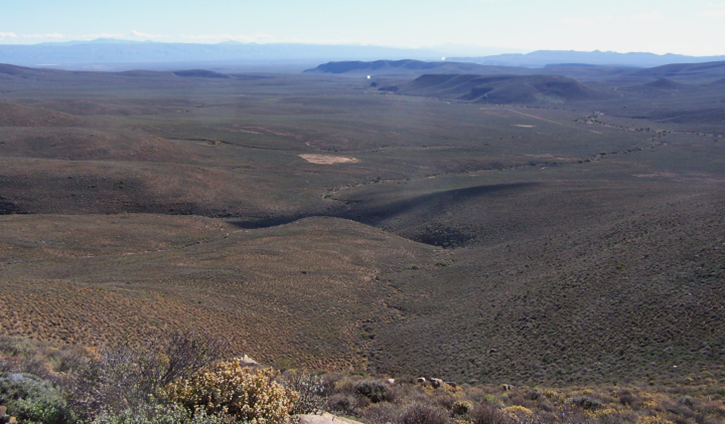 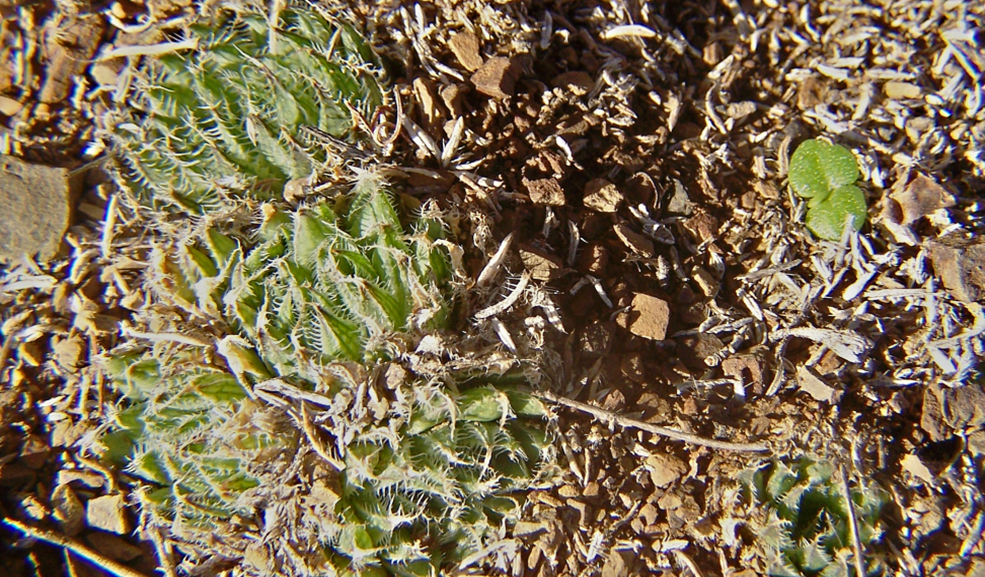 The next week took us on the road, the Patatsriver road, from the southern Tanqua to Matjesfontein east of Laingsburg.  We stopped on the advice of Gerhard Marx at a well known spot at Perdekraal where Lithops, Didymaotus and Tanquana occur.  We saw the same small H. arachnoidea there (MBB7658 see figs 7a-c). 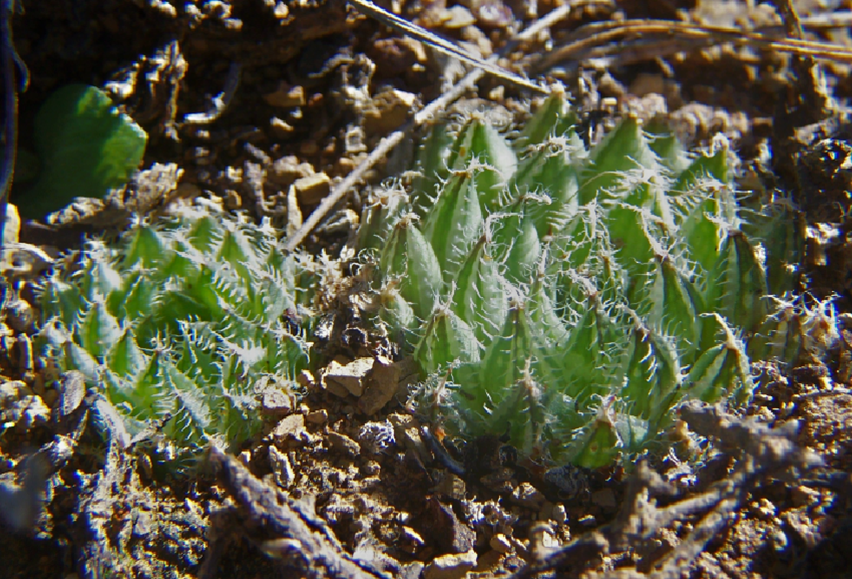 From there we turned north to Bantamsfontein for H. venosa subsp. granulata and we were surprised to find again the same H. arachnoidea at every place we stopped on the farm (MBB 7660 see figs 8a-e). 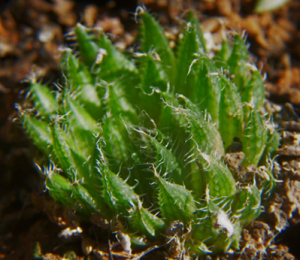 We travelled on in the direction of Matjiesfontein to Patatsriver and again found it ubiquitous (MBB7666 see fig  9). 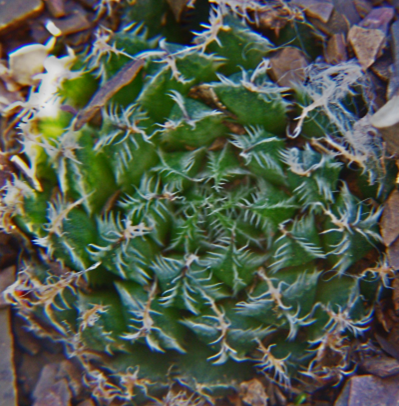 We went on to Keurkloof just northwest of Matjesfontein, and found it on the two hillsides we searched (MBB7670 figs 10a-b).

It is very important to note that Emil Heunis recorded the form ‘scabrispina’ on this farm Bulhouer and this is what I was expecting to find.  However, my four samples were observed at regular intervals of about 1km from south to north.  The southern populations were indistinguishable from any we had seen from Perdekraal in the west, but the last population, (MBB7672 figs 12a-e), were as close to as must be possible.  My contention is that we thus observed continuity from the west to the east. 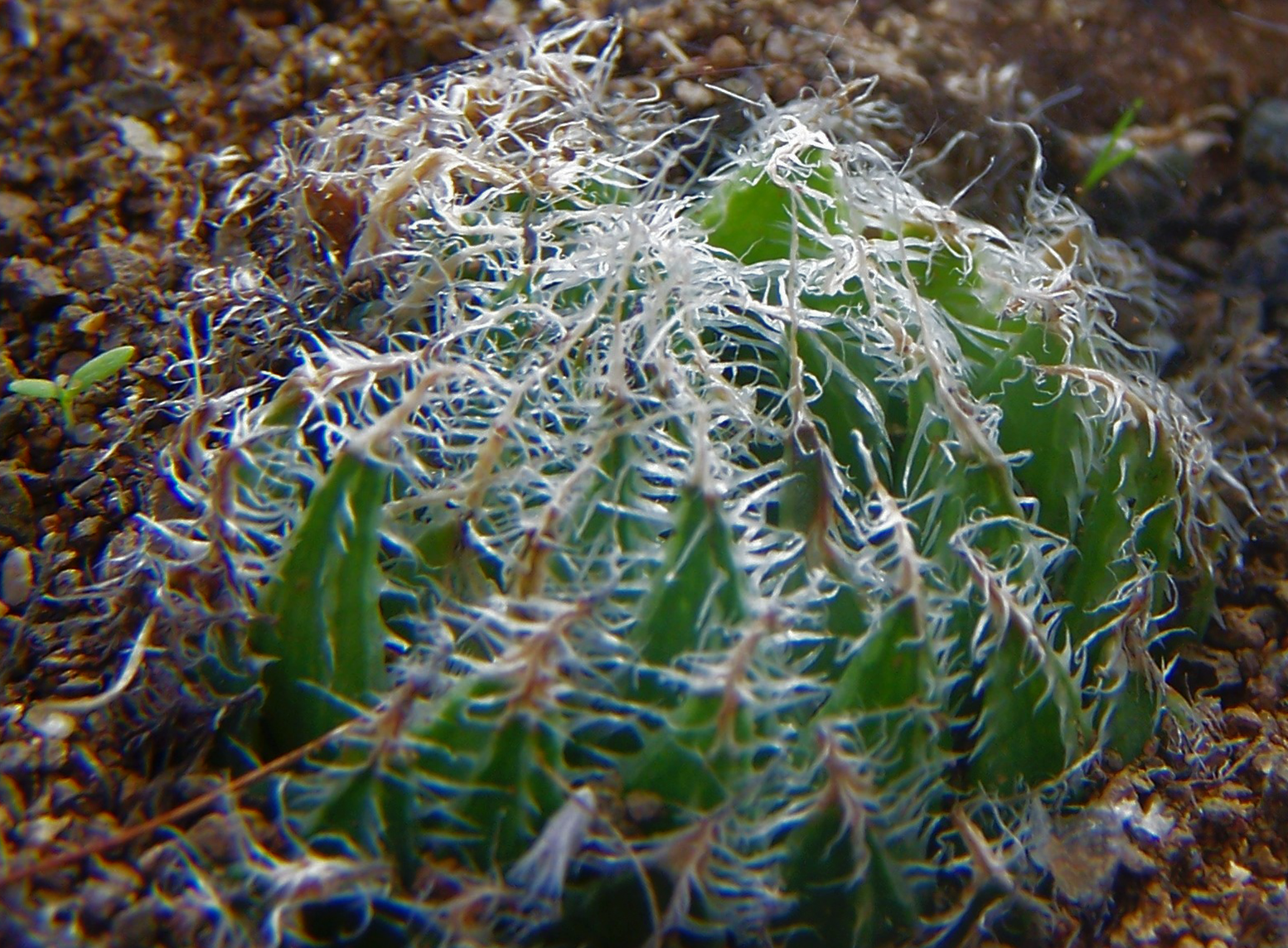 On northwards to Dwarsindieweg some 15km further and we found the small forms (MBB7677 see figs 13a-b) en route as well as commonly at Josephkraal another 16km east (MBB7678 see fig.  14).  We found it again the next day north of Dwarsindieweg (MBB7686 see figs 15a-d) on the high upper slopes of Klein Tafelkop (MBB7688 see 16 fig 54).  Heading for home we stopped on a backroad on the way to the Patatsriver road at Witrantjies  and found it yet again (see figs 17a-c). We had been very cautious all the time to be sure we were dealing with one thing and not two.  On this last stop we were confronted with the first drama when it seemed fairly certain that we had also found H. nortieri and this turned out to be false. We did return later to climb a high mountain at Volstruisfontein west of Dwarsindieweg hoping to find H. marumiana.  Instead we again found small H. arachnoidea (MBB7802). 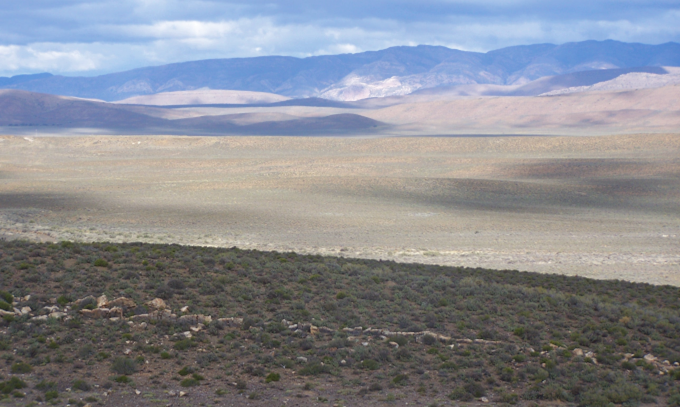 13. A view from south Dwarsindieweg.

It was not flowering time. The pictures that should have accompanied this article will show that the arachnoideas we found were often still accompanied by an odd old inflorescence  A weak spindly thing with evidence of seldom more than three old capsules.

Generally the plants were very small and we very often came across seemingly mature plants that were down to 20mm in diameter, and seldom exceeding 35mm.  Invariably we could find the odd bigger plant in any single population array.  The spination was fairly variable in respect of size, spacing and arrangement.  The leaves could be short and squat or narrow and elongate.  Colour was usually on the bright green side and I do not know what the summer colour would be.  Leaf markings were interesting because often there was a slight reticulate pattern to the leaves and translucent dots and stripes and margins could be observed.  This seemed to diminish in a cline from west to east.  We did conclude, because this is what we also wanted to observe, that there was some evidence for continuity with H. arachnoidea var. scabrispina.  There was the one population, however, north of Bulhouer where the plants were indeed bigger (50-60mm diam) and there was a definite tendency to form overarching brown spination so characteristic of scabrispina.  There were of course the odd variants elsewhere and one group of four plants east of Dwarsindieweg could have come from the very confounded interface of H. arachnoidea and H. mucronata that is covered in the Latin H. arachnoidea var. nigricans.  Readers should recognize that there is no way in which the nomenclatural code can be used to account for this diversity and variation, and it is time that more space and recognition is given to this very common phenomenon in the general context of writing, speech and communication.

The pictures will include one of ‘candida’, an epithet conveniently supplied by M Hayashi for a variant of H. arachnoidea that occurs very close to Ladismith (KG16/72 see figs 18a-c).  The spines in these plants often are black at the tips and the same phenomenon can be observed in massive plants that occur near Worcester in the “typical” variety arachnoidea.  But I would like to break away from this usage.  The epithet arachnoidea is applied to every single plant of that species wherever it occurs.  Varietal names of any kind may be attached and I especially recommend the form and the formalization that Gordon Rowley advocates too; this is the format example…H. arachnoidea ‘scabrispina’.  For more precision a whole host of abbreviated prefixes could adorn the label e.g. cf ‘scabrispina’ meaning “compare with” or v ‘Scabrispina’ as a cultivar or var. scabrispina as a generalisation.

There are a set of varietal names in H. arachnoidea already, and the proper address for these small Tanqua plants discussed in this article is in terms of my own Revision H. arachnoidea v. namaquensis.  I do not think that my dispensation is adequate or good enough for the scale of our present knowledge, but neither do I think formalization is going to do much more than arouse an egocentric mass of still more Latin epithets.  So I strongly suggest that we as a community simply accept something like H. arachnoidea ‘tanqua’  or ‘minuta’ and drop any pretension that latinization adds any lustre or glamour to plants that are already fascinating and attractive. One of my objections to what I find a really irksome process of formalization (typification, full citation of basionym and all that stuff), almost senseless, because unless a microchip is also implanted it is unlikely that there will be any chance of associating any plant out of habitat back to its origins.

I am not going to write any further about H. nortieri cf ‘pehlemanniae’  here because I need to know more as well as confirm something about the flowers and flowering times of both sets discussed here.  There were the occasional dark coloured plants in the arachnoidea (and excuse me dropping the ‘H’ – it really is not necessary in this informal environment), but I doubt very much that anything further will support the suspicion that arachnoidea will now always be confusable with nortieri.  It turns out that what I though might be H. nortieri because of the very grey colour tone of the leaves was in fact also H. arachnoidea. A specimen flowering in cultivation produced non-globose flowers.

1 thought on “Volume 6, Chapter 8:- A fleeting look at Haworthia arachnoidea”