I have become increasingly concerned about the poor relations that exist between collectors and the authority of Nature Conservation.  The argument that collectors threaten and despoil natural populations is very real and I do not dispute at all that Conservation authorities have a very valid complaint. They have a function to perform. On the other hand there is an interaction between human beings and nature in all its forms that should be fostered to the benefit of both sides.

Nurseries, traders and collectors are as much of the picture as are conservationists, institutions, researchers and landowners.  It is unfortunate that there is no non-government party that lobbies for the rights and activities of the former group,  but it is not my intention nor within my competence to argue all the aspects of the case.

I strongly believe that people have the right of access to nature in all its forms and the issue is one of individual responsibility and proper consideration of consequences. An appreciation of and sensitivity to nature should be reflected in whatever we do in our lives. My own collecting impulses led me to institutional employment where I could exercise my interest to what I thought were efforts more worthy than my personal interests.  From that position I also did try to share and extend privileges to a wider circle.  It is  in this way that I became involved with Sheilam Nursery.  It was not my wish or intention that my collection should have come to be housed there. However, Sheilam has succeeded over a period of nearly 40 years to maintain a fairly true record of my collections obtained as propagated material from the Karoo Garden at Worcester.  My offer of permitted collections dating from my revision of Haworthia in 1966 to the Karoo Garden was rejected and for a while resided with Etwin Aslander at Brackenfell.  It has since passed to Garth Schwegman at Sheilam who has taken a particular interest in the maintenance and propagation of that collection.

Hand pollination of haworthias has become the norm and Sheilam has made a massive effort to generate plants from this.  Of course growing plants from seed is a lengthy process, but is richly rewarded with an astonishing array of variants and beautiful plants.

Need I say how important this activity can be for an understanding of the plants and the way this is expressed in a classification?  A good example is of the hybridization found between H. lockwoodii and H. arachnoidea ‘scabrispina’ at the Floriskraal Dam east of Laingsburg (see figs 1-3).  The hybrid is very reminiscent of plants that I have seen from between there and Prince Albert; and also southeast of the Rooinek Pass through the Witteberg, and again northeast of Calitzdorp.  Roy Mottram underscored the issue of hybridization in Haworthia classification.  I have not ignored the issue, but rather viewed it as an imponderable in the continuum between populations that seems to have pattern.

Figures 4 and 5 are seedlings of a collection of mine from north east of Nieuwoudtville of H. nortieri.  They could be related to ‘globosiflora’ and it will be interesting to see the flowers.  However, it may be foolish to draw any conclusion from whatever flower shape emerges in the broader nature of the variation already observed although not adequately documented, both in H. nortieri and in other species complexes.  Plants with these stubby deeply mottled leaves can be the consequence of growing conditions just as much as of genetic variation intrinsic to a ’species’.

Figs 6-12 are seedlings of another collection of mine  (MBB7608) from Melkhoutrivier south of the lower Breede River and north of the Potberg Mountain.   This collection is reported in Chapter 7 of Update 4, I think very aptly entitled “The brutality of reality in Haworthia”.  It is one of 12-15 populations in the greater area that support my suggestion of H. mirabilis as including H. maraisii, H. magnifica and H. heidelbergensis.  I suspect that H. mutica is also involved to some degree or other, while it is not difficult to extend comparisons to as far afield as Riversdale and further to H. emelyae in the Little Karoo. 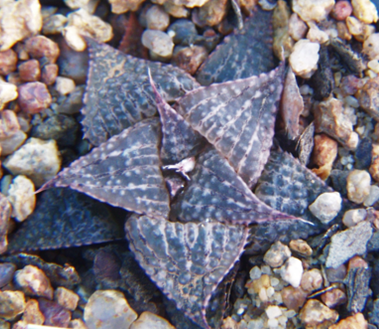 Collectors will no doubt always have a problem with plants that do not match the perceptions they attach to names.  Kobus Venter has always expressed anathema for anything but random selection when collecting specimen plants. This is in some degree correct because the specimens are supposed to represent a population.  However, the opinion on a population is largely based on field observation. Subsequent cultivation and observation do not greatly influence that, while oddities and unusual forms may help mould opinion.  While Nature Conservation may object to the introduction of permitted collections eventually into the collecting arena, I see no ethical grounds for this.  I insist that it is an undeniable right that people have right of access to a natural resource with the proviso that there is no pressure on sustainability.