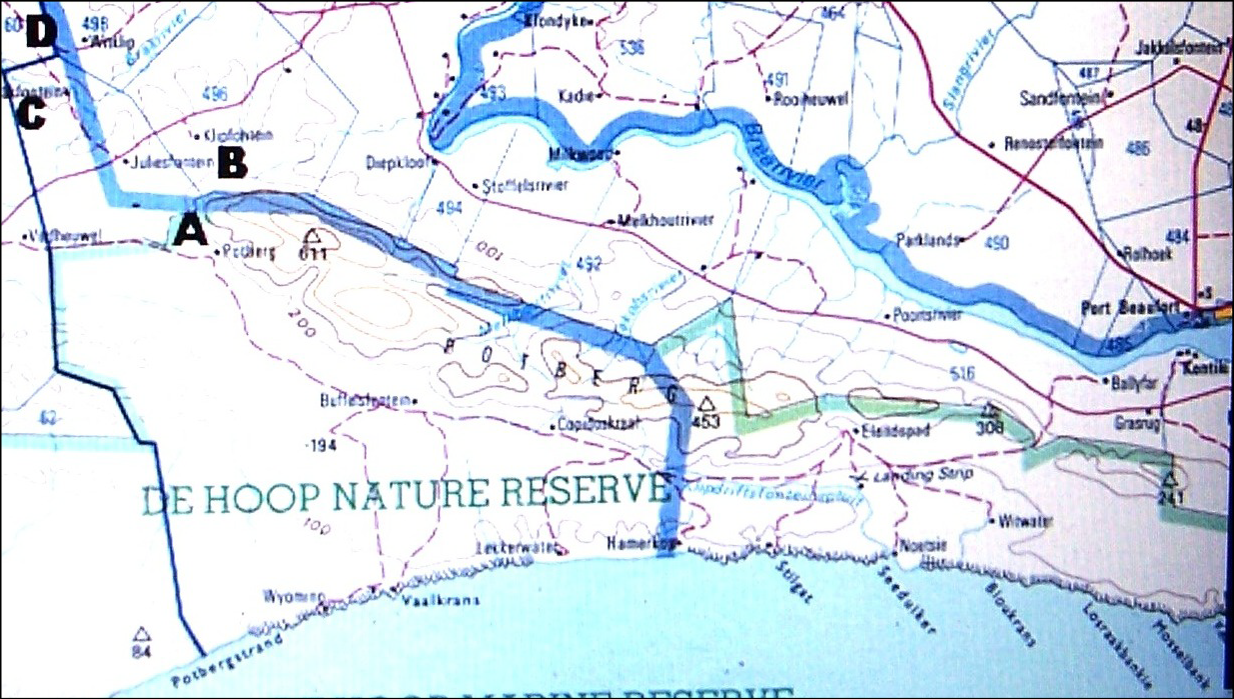 When I was at the Karoo Garden I became a bit befuddled by the way botanists referred to the Cape Floral Kingdom.  It seemed to me that they used the term for the vegetation that was on the Table Mountain sandstones and conveniently excluded that which was not.  Thus the “Fynbos” vegetation, characterized by its Ericaceae, Proteaceae and Restionacea, was synonymous with this floral kingdom.  An official document was published at the time which purported to classify the Southern African vegetation into biomes as major floral assemblages with very broad boundaries.  It did not make sense to me because my observations were that the “fynbos”, however different in terms of historical origin, was essentially a flora of the sandstones, and that there was rather a winter rainfall biome which included karoid (Succulent Karoo mainly) flora.  The role of geological substrate and skeletal soils seemed to me to be pivotal as there are places where one can virtually take a single step from one vegetation assemblage into another.

My impression is that it is the dramatic range of geological formations and highly eroded and eroding (in geological time) surfaces that is responsible for the extraordinary diversity and variation of the Cape Flora.  My experience was also that taxonomists were not really aware that this might be significant in respect of plant classification.  Botanising in the north and east of the country is not quite the same as botanising in the Cape and certainly it appears to me that European botanists familiar with the plants of a non-eroding land mass do not, or did not, give enough attention to the relation of substrate to plant variation.  Unfortunately I am not a geologist, but I want nevertheless to illustrate a few plant populations which demonstrate the complexity of the problem where dramatic differences in soils over very small distances are reflected in variation in vegetation and in the plant species themselves.

In the Compton herbarium, there is a specimen of a Haworthia collected by Prof. Compton.  It is labeled as from “Potberg sandy flats”.   Now I digress because there is a problem of semantics.  The word “retuse” is currently defined in botany and in the Collin’s Dictionary as “end rounded with a central depression”.  In Smith’s “Dictionary of Plant Names”, the name “retusus” is said to mean “with a rounded slightly notched tip”.   But this is not how it is understood nor used in Haworthia.  Haworth, and other writers of the time, used the term(s) “retuso-deltoid” to describe leaves that are “bent back like the end of the thumb”.   Thus “retuso-“ meaning “bent back” and “deltoid” referring to the triangular end-area.  It definitely does not refer to the end notching of a flat leaf face.  When we speak of the “Retuse” haworthias, we mean plants with bent back leaves and a flat triangular end-area.  Prof. Compton’s specimen was of such plants where in the dried herbarium specimens the margins of the leaf ends seem to have been cartilaginous.

No other collections of Haworthia were known to G.G. Smith from the Potberg area other than perhaps H. minima.  The Potberg area (see map page 92) is also quite extensive as it is about 35 kilometers long and about 10km wide.  My records at the time of writing Haworthia Revisited were virtually limited to reports of Luckhoff, Otzen and Herre of a small black species (maraisii!) and two collections of such a plant by both Frank Stayner and Peter Bruyns.  I had twice been down to Infanta to be shown H. variegata by Chris Burgers on one occasion, and when I collected H. turgida south of Malgas on another.  However, Chris Burgers had also reported two different plants, and one of these was from Buffelsfontein, south of the Potberg inside the DeHoop Nature Reserve.   It was not possible to form any opinion about Burgers’ specimens without seeing live plants and I assumed that they were probably in the “mirabilis” complex.  Adam Harrower recently came to light with a collection from Sandhoogte.  This is also south of the Potberg, but about 15km east of Buffelsfontein.  I was fortunate enough to see this population and was of the opinion that it was close to H. mirabilis.  I was not convinced that this was what Prof Compton had recorded, but the phrase “sandy flats” also stuck in my craw. The Sandhoogte and Buffelsfontein populations (figs 1 to 5) are in very rocky streamside slopes and sandy flats are not the place to look for any Haworthia.  The leaves in these plants are sub-erect and this seems to be related to habitat where slope and cliff dwelling plants differ from those on the flats.  I regret that the pictures are not strictly comparable.  We had spent the day trying to relate the DeHoops Oxalis records and scrappy specimens to correct names, and the final search for Burger’s Haworthia was more difficult than we had anticipated.  By the time we found the plants, the light was too poor for photographing them. The photographs of the two cultivated plants obscure the close similarity of the plants in the field populations. 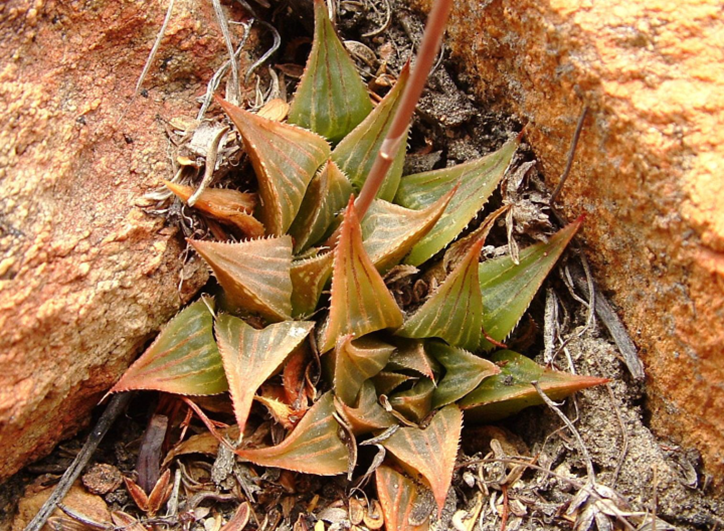 While partly motivated by trying to locate Trichodiadema and Acrodon species for Dr Heidi Hartmann, my wife and I discovered extraordinarily pilose “retuse” plants along the lower Breede River (figs 6-9)  This is about 4km over the Potberg from Sandhoogte and I surmised it to be the same, as both those and the Buffelsfontein plants evidence incipient spination.  All these collections flower in late summer and I consider them to belong in the greater “mirabilis” group as it is becoming increasingly clear that fewer species is more probable than more. 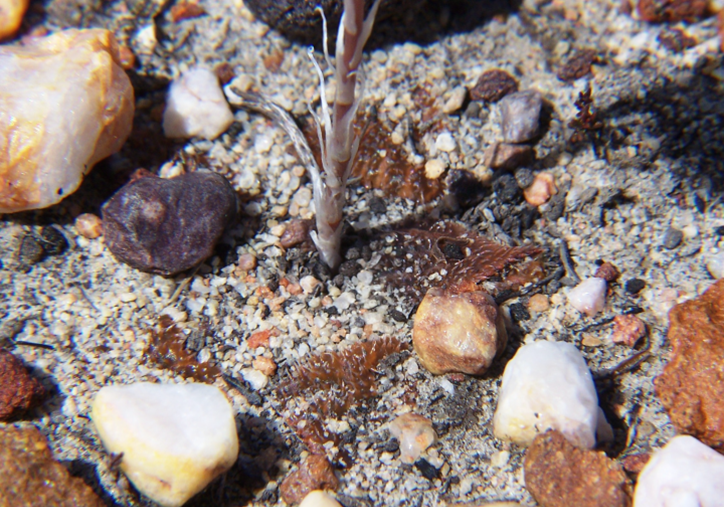 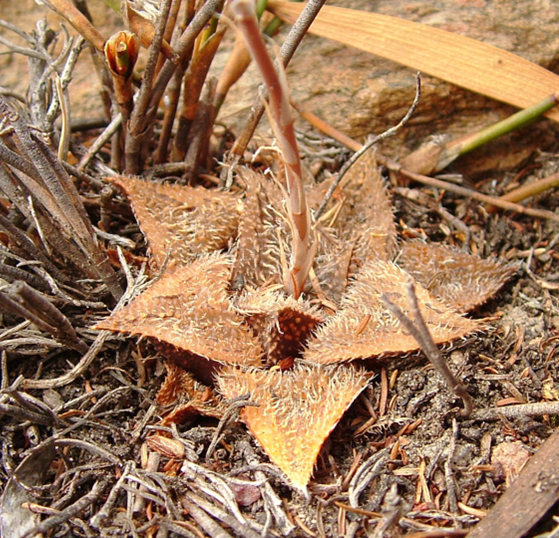 On our most recent visit to the area, we discovered an almost smooth version of the plants being discussed, at a point about 4km over the mountain from Buffelsfontein (figs 10-12).  The habitat is extremely rocky and gravelly, as at the lower Breede River, and I am sure that this is now related to Prof. Compton’s collection.  The fact that the leaves are retuse in these latter two populations is related to the levelness of the area.  I include all four populations in an informal category I refer to as H. mirabilis “pilosa”, despite the fact that in one population only, the plants are startlingly hairy. 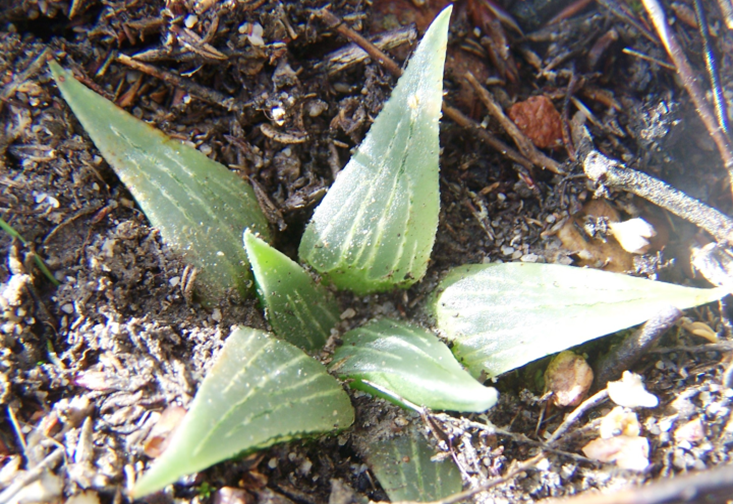 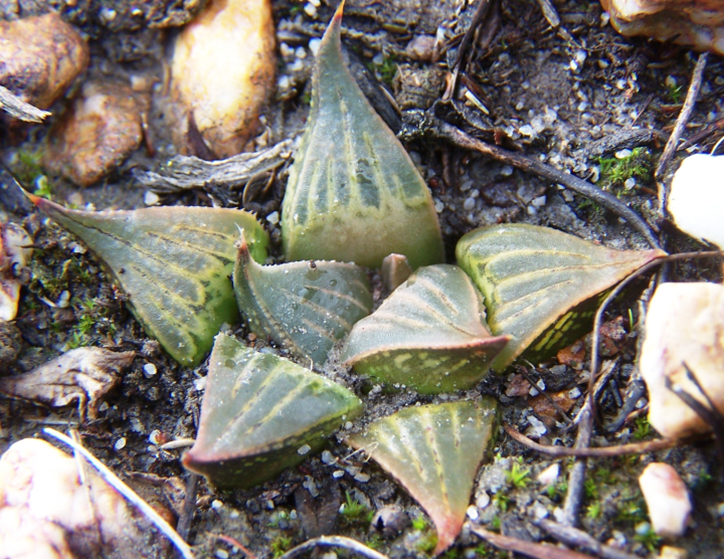 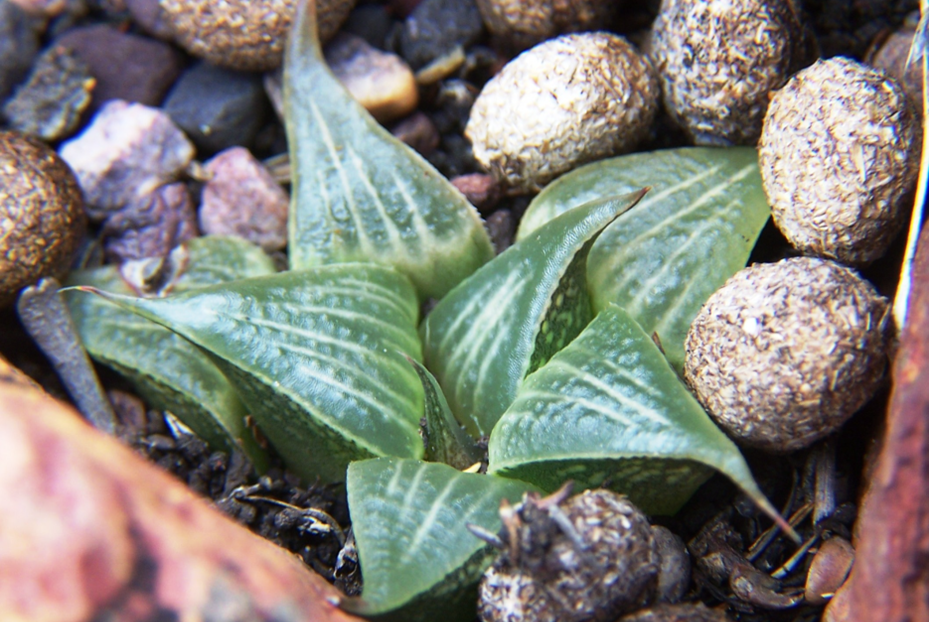 Now I come back to my starting point.  The geology of the area is most complex.  The Potberg is mostly Table Mountain Sandstone except for the eastern most tip which is Cape Limestone.  At the foot of the western end there is Bokkeveld shale which is home to a tiny remnant of renosterveld and all of this vegetation type that is included in the DeHoop Reserve.  South of the Potberg it is mostly sandy and the vegetation is “fynbos”.  North of the Potberg is a different story all together.  While the sandstones meet Bokkeveld shale, the situation is confounded by the extensive and complex tertiary deposits characterized by ferricretes, silcretes, terrace and fluvial gravels and other.  This is reflected in the vegetation of the area and close alongside Fynbos genera one can find dense patches of Succulent Karoo species such as Gibbaeum austricola and Acrodon.  If one can step from one vegetation type into another like this, it is axiomatic that the complex exposure of this mother material is going to have a dramatic influence on the species that comprise the vegetation.

While I think that the collections I record here are related to what Prof. Compton collected, the habitats can definitely not be described as “sandy flats”.  However, I can by no means be said to have explored the area thoroughly.  The plants are very cryptic and can be confined to very small and localized habitats so they are very easy to miss.